Severe weather report, among other things

I'm writing this from home. We (Ron and I) drove through a bad thunderstorm and hail (thankfully small) on the way home from Afton Station. As soon as I got home I turned on the TV news and they're talking about a tornado on the ground a few miles from Afton. As you can imagine, I'm watching carefully. It's south of Afton now, out in the country where it will probably cause little damage, but you never know. The stormchasers sound very nervous. Frankly, so am I. I'll let you know what happens. My thoughts are with folks in the path.

Meanwhile, it was a perfectly lovely day at Afton Station. We had 12 visitors, coming from Ohio, Los Angeles, Minnesota, North Dakota, Chicago, and several from Oklahoma. The Los Angeles guy was a filmmaker looking for locations for a documentary about Route 66, with an emphasis on "Muffler Man" statues and other "big" things. He said he was definitely considering Afton Station as a location. Cool! A fellow from Vinita OK is a builder, seller, and flyer of small planes, and he offered to fly over and take some aerial photos of Afton Station.... free of charge! Yes, I'll take that! A cattleman from Lenapah OK came in with a female friend. He was the perfect image of a cowboy -- tall and lean, big cowboy hat (which he tipped when he came in the door -- when was the last time you saw that?), boots of course, and a twang that made his speech almost unrecognizable. Really neat guy... I love cowboys! The folks from Ohio were doing the full Chicago-to-LA Route 66 tour.
Looks like the twister is starting to drift toward Afton. It's 5 miles west of Afton now, and there's still rotation, but it's not quite as strong, and possibly lifting. Pardon any typos, because I'm typing with my fingers crossed.
Betty arrived in the afternoon bearing some more Amish butter as an Easter gift. She's so sweet and generous. She stayed for a while, and I'm always happy for that. I took some photos of the bathroom because I've entered the Best Bathroom Contest sponsored by Cintas. They emailed and asked for photos. Ok, whatever. 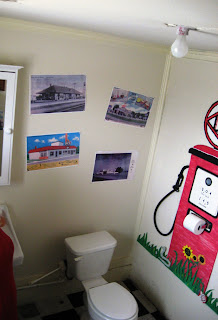 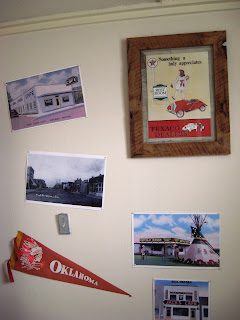 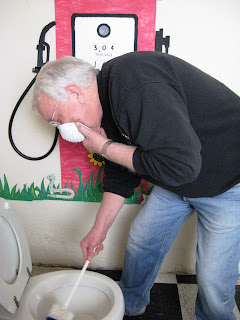 Now they're reporting a huge wall cloud about 3 miles east of Afton, but nothing on the ground. I'm sure we'll have some slight damage from the wind, but as of now it appears we've dodged the bullet. It's heading for Miami now, and since Betty lives there my thoughts will turn to her until it's gone past. Living in Oklahoma is always interesting.

The tornado has weakened and is moving out of the state, but it has left some damage between Afton and Miami. There are other threats further south, however, and massive fires in other parts of the state. Living in Oklahoma is a thrill a minute.
Posted by Laurel at 6:08 PM

I hope it works out that the guy chooses Afton Station to be one of his locations! How exciting!

The weather? Exciting in a BAD way. That sounds very scary, and I hope the damage is minimal.