I drove to Afton in a fog of my own making. It was a perfectly clear day, but my brain wasn't. It was one of those (extremely rare, for me) I-don't-want-to-get-out-of-bed mornings. But I forged ahead and by the time I got to Afton, I was reasonably awake and yet still yearning for a slow day.

Well, I got my wish. The morning was completely quiet. I cleaned the bathroom (and took note of the fact that somebody broke the toilet seat!), removed the fingerprints from the tops of the glass cases, chased a few dust bunnies, and did some restocking of sales items. Otherwise, the Station is looking better than ever, thanks to the big pre-rally cleanup. The windows are all sparkling clean, the floor is as well, and other than a few dirty crockpots left over in the car museum side, it's just about perfect. David and Sylvie arrived at around 11 and took all the dirty pots home, since our facility for washing big things isn't good at the Station and the hot water is at a minimum. Betty came and sat for a while, and Marly came to do a few chores, too. Jacson from Brazil stopped by -- more on that later. But still no traveling visitors.
Finally, at about 2 p.m., four nice cars pulled in (three Vettes and a Mustang, I believe) and our first (and last) visitors arrived. They were four couples from Red Oak, Iowa.... heading for a week-long Route 66 tour going as far as New Mexico. I was glad to have at least a few visitors today. It's not a pretty day -- dark, gloomy, windy -- so I was about to go into a big funk if at least I didn't get to see a few travelers. Of these four couples, the women wanted to go next to the winery/tasting room in Vinita and the men wanted to go to Daryl Starbird's Rod and Custom museum, about 15 miles away. The argument was settled when they decided to split up and meet later at another location. Marly was still there, so he helped me close up the Station and I headed for home.
Now, about Jacson. He brought me an incredible gift. He took about 400 photos at the rally yesterday and was kind enough to burn them all to a CD for me! I took a quick look now, and they're just great. He's awfully good at composing pictures, and he didn't miss a trick. Over the next few days, I'll post a few of the best ones each day. Here are a few for today. 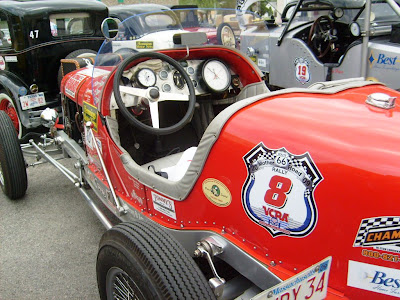 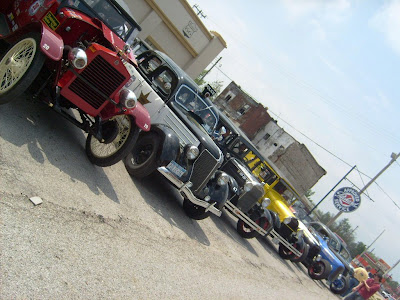 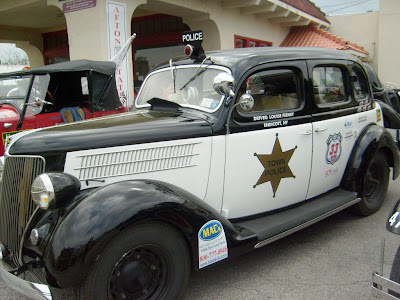 Looks like it was fun. Wish I could have been there.
I liked Darryl Starbirds museum. I visited that once.

I noticed the police car in one of your previous pictures--cool to see a closeup!

Sorry it was kind of a slow day, but it wasn't a total loss!