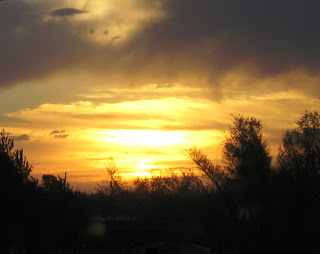 I have lots of time to think on my long drives to and from Afton. Today I was pondering perfection as it relates to Route 66.

I came here from 30 years of living in suburban Connecticut - just outside of New York City - where everything is expected to be perfect and, by some standards, is. Cities are busy and clean. Fashionable shops and magnificent homes line the streets. Small towns are "picturesque" and litter-free. The countryside looks like a calendar picture. Totally Martha Stewart territory. No wonder I was never comfortable there.

Route 66 is my idea of perfect imperfection. It's a bit like me. It's a little run down but manages to retain a modicum of charm. It's big. It's lived-in. It can be friendly. It remains optimistic even when maybe it shouldn't. From it, you can see miles into the past and miles into the future. For what some insist on calling a "dead road", it's the most alive place I've ever lived. It's my kind of place. 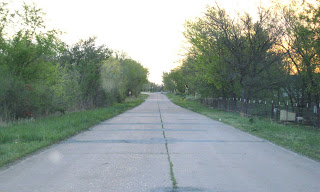 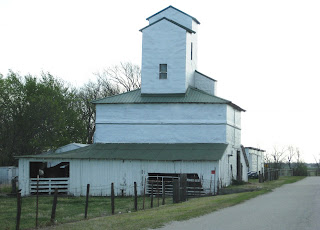 Today there was lots of bustling around at Afton Station to get ready for the big cruise that's coming for lunch on Saturday. Luis was there all day painting the roof (finally!) and mowing our pathetic grass. Marly was here earlier to work on the 2CV, then David came and swept him up and took him off to Sam's Club, where they bought everything needed for Saturday. They bought a new glass-fronted cooler that holds 150 cans of pop and bottles of water, 8 big tables that seat 8, and all the food for the luncheon. We stowed as much of the food as we could at the Station and David took some home with him. We set up the new cooler and filled it.

Meanwhile, I was entertaining a gaggle of visitors. There were 11 in all, including former New Englanders who now live in Miami OK, a couple from Topeka KS, three from Locust Grove GA, and several local types. My favorite guest this morning was Jacson Lima, a remarkably nice and interesting guy from Brazil. He's spending a few weeks working in the area, so he might be back for another visit this weekend. As he said in the guest book, he's fulfilling his "dream" by being on Route 66. Here he is: 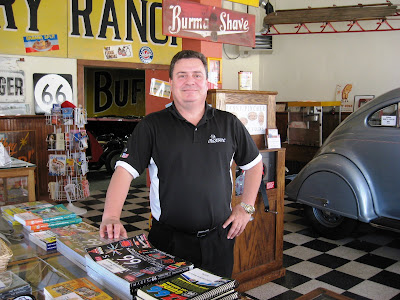 Marly was at the Station yesterday and had 9 visitors, from France, the Netherlands, and California. I just wanted to put that on the record. So far, it's been a chaotic but exciting week.
Posted by Laurel at 4:53 PM

I love your description of the Road and how it compares to you!

Sounds like it's going to be a fun weekend--can't wait to hear about it!

Last year I rode my Sportster to Clinton for the Route 66 Festival there. There were lots of hot rods there. Some of them looked just perfect, all clean and shiny and straight.
Then I saw a truck, kinda rough looking, black primered, chopped, channeled, and sectioned. The interior was rather rough looking, with, best of all, a gear shift lever reaching nearly to the roof. If you looked just right you could almost see James Dean leaning on it.

Can you guess which one I liked the best?