I know I said I wouldn't do it again, but I lied. You see, we got word that the bridge over the Little Cabin Creek just outside of Vinita is in line for reconstruction. I go over it twice each day when I drive to and from Afton, and it's one of those bridges that catches my eye every time. It seems sound enough in its present state to me, but I admit to knowing nothing about assessing bridge strength and load bearing. It's a pretty little bridge, with ancient concrete side rails and two pony trusses, so I'd hate to see it radically modernized. Since my clout with the Oklahoma Department of Transportation is just about equal to my knowledge of bridge soundness, I'll keep my mouth shut on this one, but I'll keep my eye on the progress of the work so I can whine when they do something awful to it. 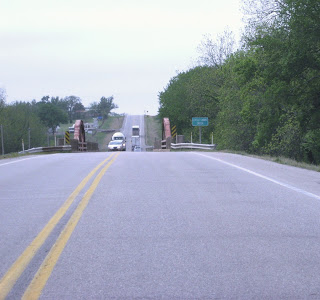 So anyway.... I had to photograph the bridge this afternoon on the way home from Afton, and I did so with the car in motion on a 2-lane highway with a rather pissed off trucker behind me. I just had to do it. :-) These aren't great pictures, but considering....

It was another gloomy day today, one of many in a row. I've learned that the weather has little to do with traffic at Afton Station, although today was gloomy in terms of visitors, too. I was alone most of the day. Only five travelers eventually visited -- a couple from Lenexa, KS, a guy from Tulsa selling Studebaker parts, and a couple from Missouri. To occupy my spare time, I cut out the stencils for a runner I'm making for in front of the door. A photo of the rug will follow tomorrow, if I have time to finish it. Toward the end of the day I had a visit from the two Mormon missionaries who are assigned to Afton. They've come in before, and with the understanding that they're not to do any prosthelitizing to me about their religion, we've had some fun conversations. I'm fascinated about how young boys (19 years old) are expected to leave home for two full years without any contact, in order to do their churchly duties. They're nice kids who come from typically (for LDS) huge families at home, but they say they're not homesick at all. Hard to believe. But really very nice boys.
By the time I left Afton, the sun had come out.

I hope the bridge restoration will stay close to the original. From reading Ron's blog, it sounds like several places are staying true to the original design, and I hope that holds true for your bridge!

It's funny to me that you cautioned the young Mormons that they could come in as long as they don't try to convert you. I'm not sure why...I guess I can sort of imagine the conversation!