Ok, I challenged Clanton's cheese and sausage omelet this morning for breakfast and the omelet won. Even though it was about the most delicious thing I've ever tasted, I couldn't even begin to finish the whole gargantuan thing. And, as a result of this terrible excess, Afton Station isn' t even open yet and I'm already nodding off. Sorry Clanton's, but no more BIG breakfasts for me. From now on..... an egg and toast!
______________
I'm home now. Eleven hours later and I'm still not hungry! Every now and then there will be a day at Afton Station that can be described as "routine", and probably won't make a very exciting blog post. Today was that kind of a day, so this will be short... with no pictures.
I had 11 visitors today. The first couple was from the Algonquin National Park area way up north of Ontario, Canada. Since we used to vacation up there, we had much to talk about . They were on the way to the Grand Canyon. Next came a fellow from Virginia on a motorcycle. Betty stopped in, then David. Betty brought me some of her special spiced pretzels. I tasted them and they were excellent, but I was still full from breakfast.
Later in the afternoon, a delightful couple from Broken Arrow, OK came for a visit. He used to work for Sunray D-X so he was interested in our D-X memorabilia. Then, a couple of my "regulars" from Afton dropped in to say hello. I love it when younger people from right here in town get that amazed look on their faces when they learn they live on Route 66. Shortly thereafter, another local lady came in to introduce herself. Finally, as I was closing, a guy from Picher who was very interested in the cars came in and stayed for quite a while. A day filled with nice people, old acquaintances, and new faces.
______________
April 14th has always felt like an important day to me, and I always wake up on the 14th with thought of two tragic historic incidents that occurred on this day -- the assasination of Abraham Lincoln and the sinking of the Titanic. I pondered on both of these things today, as I always do. 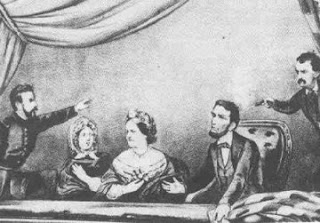 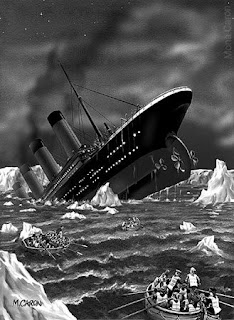 Now I've got a song going through my head: "Breakin' rocks in the hot sun; I fought the omelet and the omelet won." :)

I didn't know this was also when Lincoln was asassinated. I do know this is when the Titanic sank.

This Sunday will be the 14th anniversary of the Oklahoma City Bombing. On that day the Memorial Museum will have free admission.