A Visit from an Icon

Tattoo Man and I both knew the man looked familiar, but I couldn't place the face. Finally, Tattoo said "You look just like Roy Clark", and that's when I glanced down at the signature in the Guest Book and realized it WAS! For those who are too young or who aren't up on their country music lore, Roy is best known for being the host of "Hee Haw" from 1969 to 1992, having his own theater in Branson, MO, introducing lots of familiar songs, including "Yesterday When I Was Young", being a frequent guest host on Johnny Carson's Tonight Show, and being inducted into the Country Music Hall of Fame. I knew he had a house on the lake here (two houses down from David, actually), but never thought he'd come to Afton Station. It turns out that he's a car collector, too. He stayed for quite a while and we talked mostly about his health problems. At age 78, he's got problems with his hips and back, and recently had a device implanted in his back that may cause problems the next time he tries to go through security at the airport. He still does stage shows,though, all over the country.He was a really nice, totally regular guy. He and his friend arrived on a pair of awesome trikes, too. Roy Clark - Wikipedia, the free encyclopedia 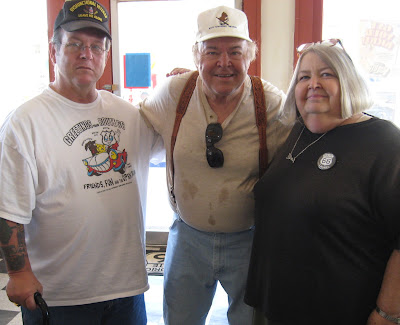 That was the highlight of the day. The low light was when a visitor accidentally knocked over the big magnet display with her purse and about 150 magnets went scattering all over the place. No big deal, but a VERY big crash!
In between, we visited with folks from Leawood KS, Ardmore OK, Oklahoma City OK, Neosho MO, Joplin MO, Miami OK, and Grove OK. There weren't many long-distance travelers today, mostly just local folks enjoying a pretty day or heading for the Calf Fry Festival in Vinita. Around here, we affectionately call it the "Testicle Festival", so you get the idea. Big plates of deep-fried calf nuts! I happen to enjoy them, but I don't know any men who will get near them. Vinita is known as the Calf Fry Capital of the World.

This guy was probably heading for the Calf Fry thing in his horse-drawn buggy. I passed him on Route 66 near Vinita. 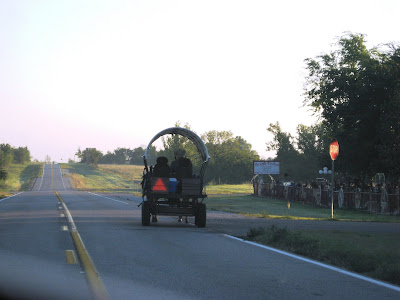 "My" corn field has been mowed. Thus the end of this saga of my agricultural voyeurism, from seed to feed. 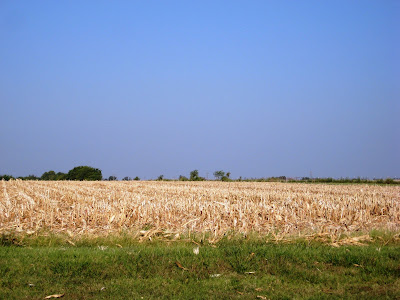 And of course there was a sunrise. 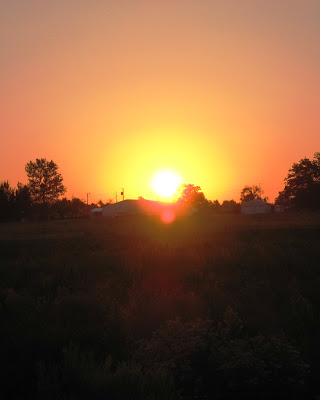 Cool that Roy Clark stopped by, he certainly has aged.

I remember Roy Clark. He can really jam on a banjo.

Speaking of "Hee Haw" cast members, has Jana Jae ever stopped to visit? I took her and another lady on a mini-cruise on our way back from a church meeting in Springfield a couple of years ago. We stopped for ice cream at Four Women, and Jana and Dean exchanged autographs, which was pretty cute. She has a store in Grove and a fiddle camp out by the lake. I told her she should stop and visit you sometime.

I met Jana when we were shopping for bands for Sarah's wedding, and I spent plenty of time at her store when I lived in Grove. I vaguely remember her visiting Afton Station quite a few years ago, but not lately. Thanks for telling her to come over some day.

Laurel, we met Jana when she played at the Route 66 Festival in
Tulsa.

Ron, I think you met her at the Festival, but not me. I could be wrong, however.

That's really cool about Roy dropping by! The Road Crew is going to play out at Lortta Lynn's place this fall. Maybe he'll show up there!