. . . but first, there was another gorgeous sunrise this morning amid the fog. It's hard to take a bad photo of a sunrise, even with my mediocre camera and very little patience. 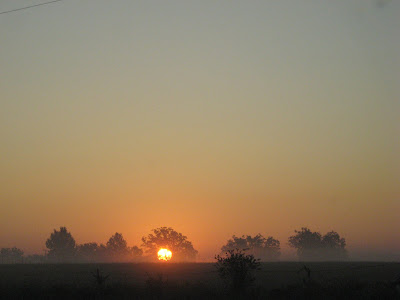 There were 19 visitors to Afton Station today. Marly and Kenny were working in the back yard, and Betty W. stopped in briefly, but for the most part I was alone. Ron "Tattoo Man" has been hospitalized for an infection and will be there for a while getting IV antibiotics. If any of my blog readers want his address or phone number, let me know. He would love some phone calls because he says he's already bored.

Ron M. has also been ill but is recovering. I gave him a break by not forcing him to ride up to Afton with me today. LOL!

My first visitors were Mike Wallace from Pataskala, OH and his friend from Columbus, OH who were on their motorcycles heading home from a partial Route 66 trip. They stayed for a good bit of the morning while we caught up with news.

Next came a couple from French Creek, WV who were returning from a canoe gathering in Oregon. He is an Indian (I didn't catch the tribe) and his tribe was involved in the organization of the gathering. They were traveling without maps, but I gave them some pointers so they won't get too lost.

Dave and Brad Emerson from the "Mother Road Yellow Pages" dropped in. They're from Kansas City, but are heading westward on a full Route 66 trip during which they will check on sales of their very nice guidebook. I've sold quite a few, so they left happy. They are also asking businesses to make any changes in their advertising prior to publication of the 2011 edition. I enjoy visits from the Emersons.

Two gentlemen from Texas brought some neat customized vehicles on the road and we were lucky enough to have them stop in at the Station. I couldn't resist these photos of their rides. 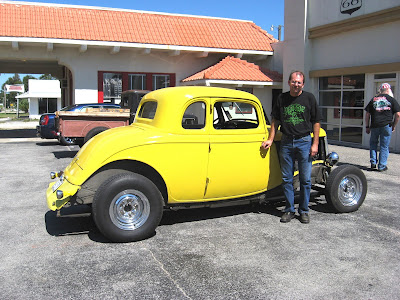 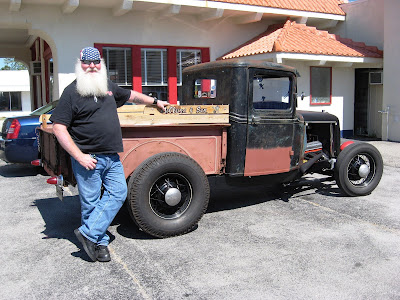 Mike Hickey, president of the OK Route 66 Association stopped in with two engineers from Oklahoma City. They are touring OK Route 66 looking at the status of historic bridges. We discussed the impending Ribbon Road Monument installation. Still not sure when that will be happening.

These two ladies from Kansas walked through the door near the end of the day and one of them (on right) said, "Laurel, I read your blog every day!" It always astounds me when a stranger knows my name and keeps up with what I'm doing most days. It's a weird feeling, but I love knowing this blog is being read, and this traveler told me that some of the trip was inspired by what she's read here. They may have arrived as strangers, but they left as my friends. 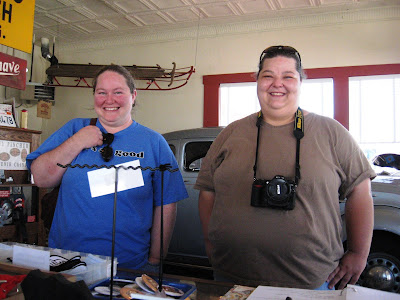 An intersection in Vinita (where Route 66 makes a 90-degree turn in the center of town), is being excavated to take care of an underground water source that has been problematic and causing flooding for years. The excavators dug down to a layer that they believe is an original segment of brick 66! I'm not sure if this is true (more research needed, in my opinion), but the city of Vinita is giving away the bricks, and the folks who rent the building next to Afton Station as a workshop for their boat cover business were thoughtful enough to gather about 8 or 10 of them for Afton Station. The bricks are definitely old, but I don't know enough about bricks to date them. This one is from the Coffeyville (KS) Shale Co. Anyone have a clue?? 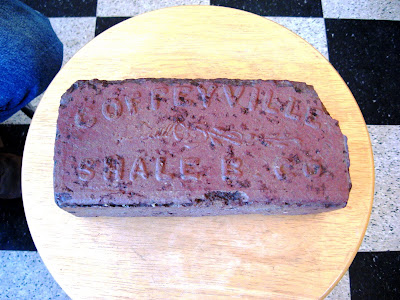 There was a nice article on the front page of the Miami (OK) newspaper yesterday, about the visit to Afton Station by the Micro Car group. After I get it copied, I'll try to post it here. Nice pictures, and great publicity for Afton Station.