It's strange how sometimes, on the days I do the least I end up being the most tired. Today is such a day. It was an extremely frustrating day at Afton Station because we had a huge chunk of time in the middle of the day when we had NO visitors. We had a couple in the morning, and the usual larger number near closing time, but the middle was a vast wasteland. I spent this wasteland in the company of Tattoo Man first then, when he left, Marly in the afternoon. I think they were as bored as I was. It's disspiriting to have "down" time, but today it was too hot to do much of anything, so basically we just sat around. The temperature was over 100 all day, but our trusty air conditioner managed to do the job so we were comfortable. Marly, who worked outdoors in the back yard all morning, was anything but comfortable however. Here he is, cooling off. 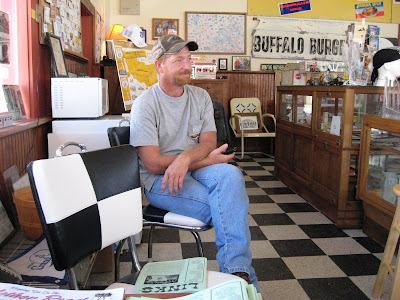 When we did have guests, they were very special as usual. They came from Grand Rapids MI, Smithton PA, Seneca MO, and Adair, Vinita, and Grove OK. Our most special guests were this cute young couple from Smithton, PA on their honeymoon! Isn't it great that American young folks are choosing Route 66 as a honeymoon destination?! They told us that their friends questioned their sanity when they announced their plans, but they are loving the whole trip. Congratulations to them! Even "my" corn field is showing the effects of the heat. Look how brown it is! 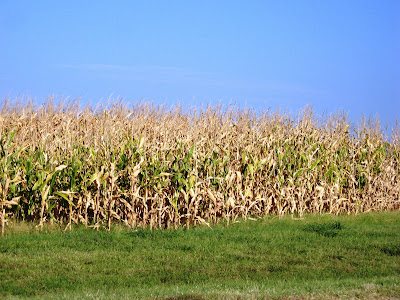 I won't be blogging again until Friday, after the visit from Dale Butel and his Aussie group. On Thursday when I get home from Afton I'll be going straight to evening dialysis so I can be free to greet the aforementioned Aussies bright and early on Friday morning.
Posted by Laurel at 5:24 PM

Starting off their lives together by seeing this great country on a Route 66 road trip. Sounds great to me.