Titirangi, Jaszbereny, and Other Exotic Names

Uh oh! My imagination is kicking in this morning. That can be a dangerous thing. I'm in Afton, of course, and I've already had two visitors, a young woman from Santa Rosa, CA who is a tour director for Intrepid Suntrek (Intrepid Suntrek: Active Travel and Adventure Tours in Small Groups - Home), and her lone passenger on this Route 66 tour, a lady from Titirangi, New Zealand. (The places from which my visitors are originating are getting more and more obscure!). The two seemed to be having a great time together.

But now I'm alone and have been for a little while, and that's when I start imagining. I try to imagine this street filled with bustling humanity, quite the opposite of the sole shuffling man who has paced back and forth on this block for the last hour, maybe 20 times so far. Afton suffers from a woeful lack of people these days. Afton Station is the excitement hub of the town, but being the main attraction in a ghost town ain't sayin' much! Therefore, I must use my imagination. An open grocery store. . . dry goods store. . .drug store. . . cafe. . .cars parked nose-in up and down First Street. . .a waiting line to get to the pumps at the filling station. . .kids on the street happily sipping limeades from Betty's place down at Buffalo Ranch. . . folks walking dogs and stopping to chat with neighbors. . .trucks waiting to be loaded at the feed mill. . . families checking out and putting luggage in their cars at all of the many motels along Route 66.
It was all here once, and it's still here, clearly, vividly -- in my imagination. I wasn't here when any of these things really happened, of course. But I know they once did. The ghosts told me.
____________ 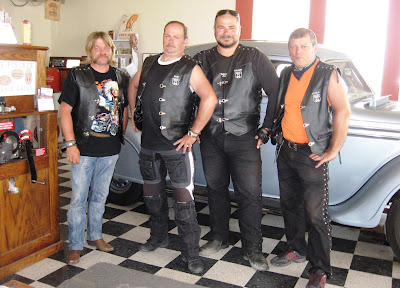 These four gentlemen from Jaszbereny, Hungary just arrived on loaded motorcycles and sporting matching vests with Route 66 patches, made especially for their trip. Meet Attila, Robi, Szlard, and Lati. Szlard spoke a bit of English so we could communicate to some degree. They rented their bikes in NYC and plan to drop them off on the West Coast. 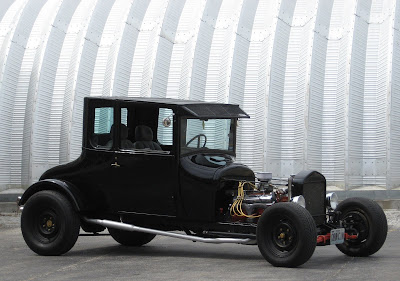 A 1927 Model T rolled in around noon. He's a "T" collector from Stella, MO, traveling with his wife.

Next came a couple from Windermere, FL. I knew that Windermere was the home of Tiger Woods, and since the folks live right around the corner from him, she had some very interesting stories about the period in which the neighborhood was jammed with news vans and helicopters buzzed continually overhead.
_____________
Have you noticed that I like sunrises? Well, this morning's was amazing. So amazing, in fact, that I'm going to post two pictures taken about 10 minutes apart. It was quite spectacular! 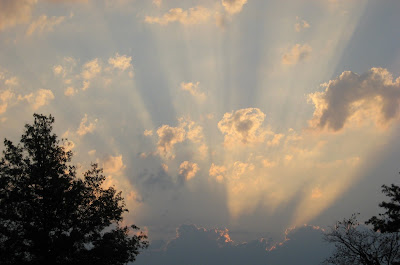 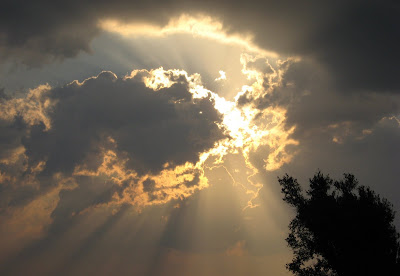 That Model T sure looks cool!

From whence will your next visitor come? Altair 4? Vulcan? Kronos?