Today was a bit crazy, but also one of the better days we've had at Afton Station for a while. For one thing, if you make future trips to Afton on Wednesdays and some Fridays, you will see a new face behind the counter. 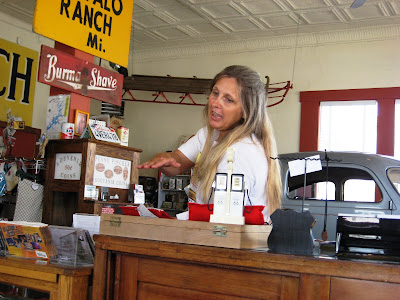 Meet Robin Phelps, whom I have hired to work the Station on some of the days I can't be there. Marly will still be working there certain days, but since his days need to be irregular for a while, Robin will be filling in. Robin is a native of Afton, lives only 2 miles away, and worked at Bassett's Grocery across the street for 15 years prior to it's closing. So she knows her stuff, knows Afton, and is quickly learning about Route 66. She was "in training" all day today, and caught on really fast! After she got all the basics down, she proceeded to clean windows, bathroom, showcases, etc. while I visited with guests, all without being asked. No complaints from me!!!

Bill McKibbon, a regular reader of this blog, and his friend Karen, came for a visit today. They're from the nearly unpronouncable town of Penetanguishene, Ontario, Canada. These lucky folks have two months each summer to wander the byways and back roads of America, and they do just that. The last time they passed by Afton Station a couple of years ago we were closed, but I was able to make arrangements to meet them there today. They're on their way home from a tour of most of the National Parks of the west. Great folks! 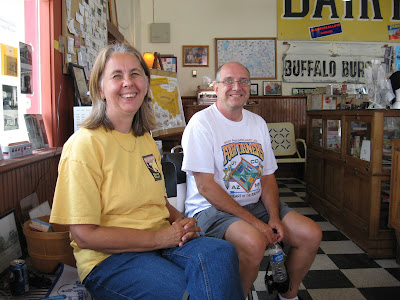 Bill and Karen
In the late afternoon, the Australian tour group led by John Cartwright arrived. There were 22 folks this time, in about 12 leased Mustangs (those Aussies do love their Mustangs!) and what a congenial group they were! Clearly, John was showing them a good time. I also didn't complain about the line at the counter caused by the copiousness of their purchases! This also gave Robin a good chance to see how we handle large groups. Robin jumped right in, led folks to the showroom, helped with purchases, took some photos, and made herself very useful. 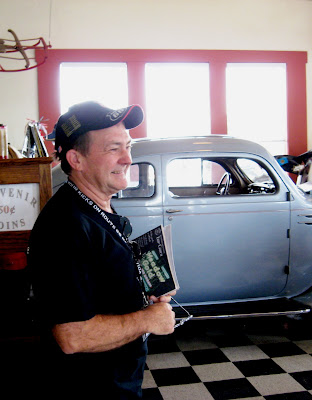 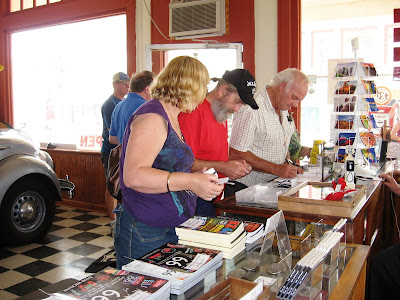 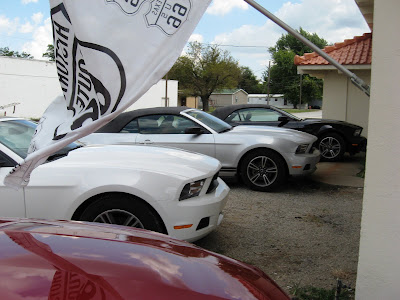 A few of the Mustangs
Other guests were plentiful today, too. They came from Lake Ozark MO, Pleasant Hill MO, Perryton TX, Centralia OK, Ketchum OK, and Mio MI. It was very nice to have Betty W. be able to spend some time with us this morning, and Betty B. dropped in, too.
____________
Yesterday, photographer Gordo Radford came for a visit to my home on his way to another trip out west on Route 66 to distribute more of his postcards and other works. We went to dinner at a very decent Thai Buffet (Gordo was in the mood for Thai, and I never object to that!), then a little ride around Tulsa just before sunset so he could take some photos. I just took this one, but it didn't turn out too bad. It's the main spire of Tulsa's art deco gem, the Boston Ave. Methodist Church. 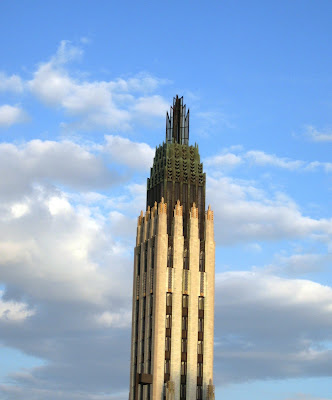 Tomorrow, Marly and Tattoo will be handling another big crowd, Trond Moburg's 47-member motorcycle group from Norway. Oh, I sure wish I could be there for that one! Boo hoo!
_______________
And guess what! There was another sunrise this morning. . . and I "caught" it! 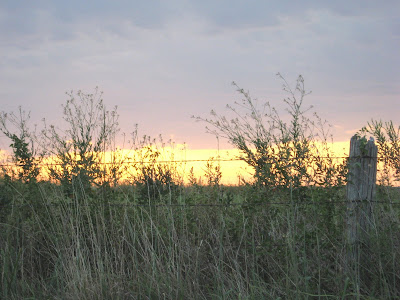 Looks like you have added another wonderful person to you station. Congrats :o)