We were excited at Afton Station today when halfway through the morning, a large group of motorcycles roared up and parked on the road across from the Station. We weren't sure who they were until the chase vehicle appeared. It was a group from Norway, on one of the manyRoute 66 tours hosted by this tour company --[ Route 66 USA - Guttedrømmen blir virkelig ] (Sorry, it's all in Norwegian, but you'll get the idea.) 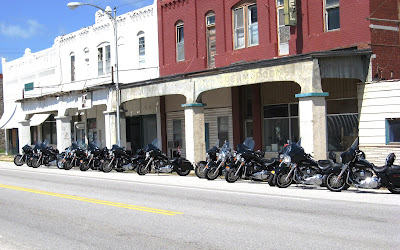 The group stayed for quite a while due to a flat tire on the chase vehicle. Charlie F., who was hanging out with us this morning, offered to go home and get his tire repair kit and air compressor because ours was missing a piece. Turns out his was missing a piece too, but between the two compressors, they finally got the tire repaired. I didn't mind a bit because I had a chance to visit with the folks for a while. Thanks to Charlie for pitching in and helping fellow bikers. 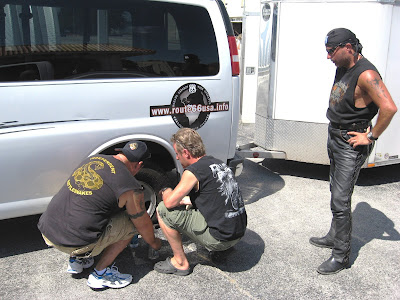 One member of the group, who sat with me for a while so we could chat, is from the archipelago of Svalbard. My first visitor from north of the Arctic Circle! Yes, really! The island is halfway between the northern part of Norway and the North Pole. Wow! He showed me some photos of the "island" on a glacier, a small village where he lives, and the polar bears who walk around town. I was mesmerized. There are about 2,500 residents in the summer but only about 40 (including him) in the winter. He's the tower-keeper at the small airport that's the entry point for the island. Svalbard - Wikipedia, the free encyclopedia. Fascinating stuff! 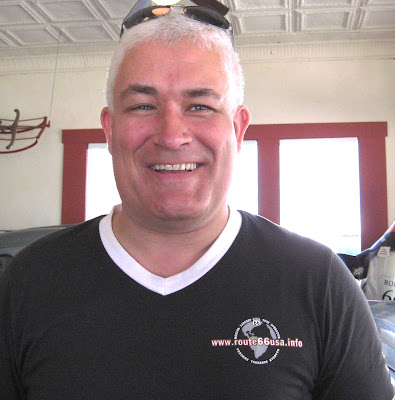 The man from Svalbard

The rest of the group shopped, breathed some cool air, grabbed some cold water, and waited for the tire to be repaired. Nice folks having fun on their trek from Chicago to L.A. in the blistering heat. Ron M., who was with me today, took these photos. 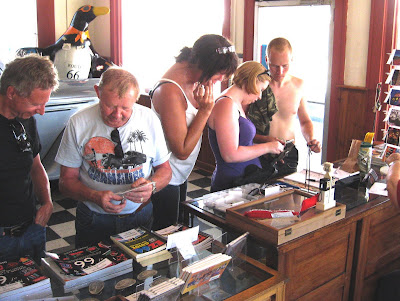 Of course we had other visitors, too. There were 33 in all. They came from Barcelona, Spain, Ft. Worth TX, Sand Springs OK, Cleora OK, Lakeside CA, Spring TX, Dallas TX, and Madrid, Spain. We started the day with a lovely couple from Barcelona and ended it with two guys from Madrid. In between, it was Americans who were mostly out for a Sunday drive.
Posted by Laurel at 5:34 PM

I've always thought I was good at geography. But, someone from the archipelago of Svalbard, a place I've never heard of? If that doesn't show that Route 66 is a world-wide phenomenon then what will?

How was he handling 110-in-the-shade-and-no-shade?

I'd never heard of the area, either! All of the Norwegians were suffering to some degree from the heat, but the Svalbard fellow didn't seem to be much more uncomfortable than the others.