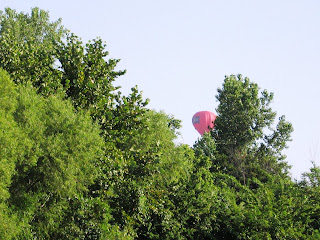 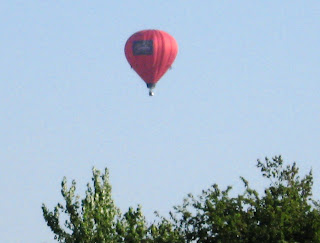 It was hot but not beastly hot this morning, so at least two balloons from the Gatesway Balloon Festival in Claremore (OK) Gatesway Foundation were able to get off the ground and float over Route 66 during our drive to Afton Station. Ron M. and I only saw one (and a glimpse of another one quite far away), so it might be that the weather wasn't optimum for ballooning.

Later in the day, the unrelenting heat moved in again, and I'm convinced that it affected the number of visitors on Route 66 today. In the morning, we had 13 visitors within a very short time. Then the temperature rose and rose and rose, and in the afternoon there were only 3 intrepid travelers who came to see us right at the end of the day. There were no long-distance travelers today. They were all from Oklahoma or adjoining states -- Ponca City, Strang, Collinsville and Pryor OK, Springdale and Russellville AR, and Great Bend KS. Betty W. and Reuben and Colleen Tipton stopped in briefly after church, too. I suspect that everybody else was hibernating.

Some of our visitors stopped in on their way home from a week at Grand Lake. Others had been to a family reunion. A couple on a motorcycle from Arkansas showed interest in the buildings across the street. He would like to start a small cafe on Route 66 and she is a doll artist who would like to open a doll museum. Wouldn't that be nice for Afton? I wish, I wish, I wish.

Some exciting events are to take place at Afton Station in the next couple of weeks. On Friday (Aug. 13) Dale Butel and his tour group from Australia will be visiting, and they're bringing a professional film crew to make a documentary. I'll be rearranging my dialysis schedule in order to be there that day. About Us - Ph 1300 760806 Then on the following Monday (Aug. 16), the Micro Car tour will be visiting. It's a caravan of tiny cars of several makes and models who are traversing all of Route 66 going 40 mph! MICROCAR NEWS Online » » Microcars on Route 66 – The journey begins. Folks who are able to join us for either of those events and others that we'll announce later are cordially invited to show up. Stay tuned! Excitement ahead!

Here's my car thermometer as we got ready to leave Afton this afternoon. It speaks for itself. 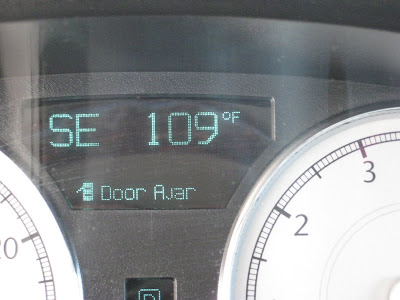 Wow, that is hot, hope the next week brings you some relief.