A Day of Much Silence 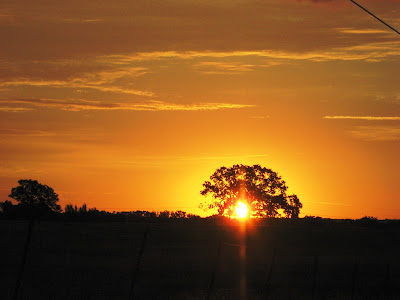 Well, 960 miles later, I've made it through my 6-day stretch at Afton Station. Maybe I'm just delirious after all that driving, talking, and smiling I've done this week, but I'm almost sure that the first guy in the door of the Station this morning, when asked where he was from, answered "the lock-up". Disconcerting? Um, yeah, especially since I was here all by myself. He turned out to be a nice old codger and he bought a Route 66 pin for his beat-up hat, so I relaxed a little. He said they threw him in jail for calling 911 just because he had a headache, but he was out now and was going to walk home. Where is home? Sayre, Oklahoma. . . over 300 miles away! It takes all kinds, I guess.

Add to the spookiness of the encounter the fact that this is the first gloomy, sunless day we've had for weeks. I'm hoping for a good dousing of much-needed rain later. The sun did come up this morning though, as evidenced by the above photo and this one of Sunny Oaks Ranch near Claremore on my way to Afton. As I often do, I took a short drift away from the Mother Road on a country lane just to look around, kill some time, and chill out from the last few frenetic days when I came upon this pretty sunrise scene. 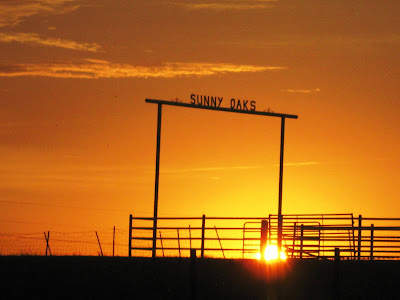 Now, I'm sitting here with no visitors and no helpers, and today that's ok with me. A girl needs some quiet time now and then. Afton is weird when it's dark, and I started to think about those ghosts across the street in the abandoned buildings. The local folks who come to visit tell me bits and pieces of recollections or stories they've heard about who used to live up in those rooms of broken windows and tattered curtains, but no one seems to have the whole story. When this was a train town with a roundhouse and a large, active depot, the railroad workers would rent the rooms for extended stays when they came here to work. I also know that at least one family with kids lived up there in the early '40s. In my own fantasies, the old Palmer Hotel was a house of ill repute, athough nobody has ever told me that and I'm sure it's not true. Nevertheless, I can't shake the image of pretty ladies in Victorian corsets hanging over the balcony and calling to the gentlemen going into the saloon below. I think I watched too many wild west movies in my youth!
_____________

The passing cars are now using their wipers. Rain, glorious rain! Still no more visitors other than a repeat visitor who stopped in to tell me about a Cadillac limo from the early '50s which is for sale in Colorado. It carried Elvis several times, he said, and he thought we might be interested. My neighbor Alex and friend Mike Pennington also dropped in briefly. 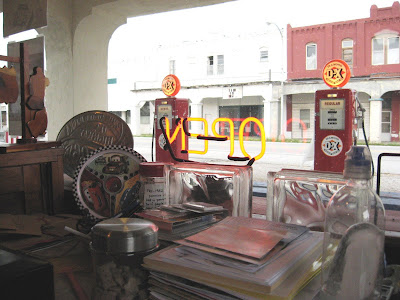 Two hours and three N.Y. Times Sunday Crosswords later, a soft-spoken couple from Roanoke, VA in a hot red Corvette convertible just stopped in. These folks are traveling without a guidebook, and therein lies the makings of a conundrum for me. When I asked them what they've enjoyed so far on their Route 66 trip, they admitted they haven't seen much. They hadn't met any of the fine folks on the road, and they had driven the Ribbon Road without even knowing what it was. I gave them copies of the two free Oklahoma Route 66 guides, but when I showed them the EZ66 Guide and suggested they use it for the remainder of their trip, I felt like a huckster who was only trying to make some money, whereas my real objective was to enhance their experience on the Road. I feel this way every time I try to encourage people to buy a guidebook. It's a tough thing for me overcome this feeling. In this case, whatever I said didn't work. They didn't buy a book, so I wished them well and they went on their way.

Later visitors included five folks from Bimidji, Minnesota who were also far from chatty. This was definitely the quietest day I've ever had on Route 66
____________

I promised you some photos by Michael Scruggs. Here are two. The first one is a "donut chaser" hood ornament from one of our Packards. The second one is very Ansel Adams-esque, I think. 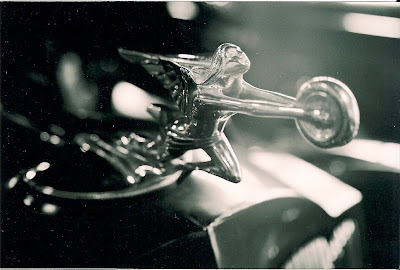 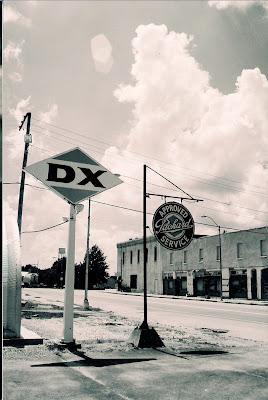 Creepy way to start the day, and it never really recovered. Enjoy a day off tomorrow.