It was a long day at Afton Station, but a really good one. I was almost 90 minutes late closing up due to a last-minute surge of visitors, therefore I just got home and will have to miss a meeting I'm supposed to attend tonight. I could rush to get there, but I'm really exhausted and have decided to forego it and relax a little. And, in further pursuit of a little relaxing time after a HUGE day at the Station, I'm going to divide my report in half and save some of the news and pictures for tomorrow.

Tomorrow, I'll tell you about all the interesting visitors. For now, I'll show you some pictures of the small (and extremely lame, I must say) birthday party I threw at the Station today for Tattoo Man and Betty, who share this Sept. 17th birthday although born in different years. (No, they're not twins!) My feeble attempt at cupcake decorating came to a screeching halt last night when I realized I couldn't find the nozzle tips for the decorator. So, the cupcakes got icing and nothing else. The brown ones are chocolate/cherry and were supposed to have Route 66 shields on them. Those were for Tattoo. The pink ones are strawberry and were for Betty, who is crazy about the color pink, and were supposed to have cherubs on them (she loves cherubs). Instead, they got candles. Celebrating birthdays when people are constantly coming in the door is nearly impossible, but we tried. 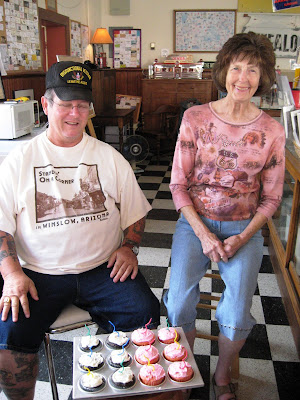 Betty decided to show us her flexibility and total lack of aging by taking a ride on a fierce bucking sawhorse. And really, there was absolutely no alcohol involved! 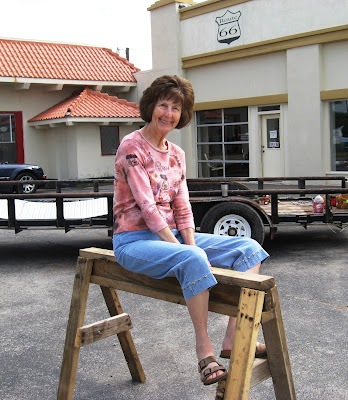 The last thing Tattoo Man needs is another tattoo, but our friends from Australia, Kat and Daz, gave him a set of "IY Australia" temporary tattoos, so he applied one to the cheek for this picture. Also, no alcohol involved. (Sorry for the bad picture here. Settings were wrong.) 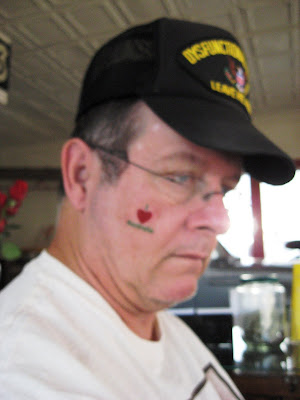 I'm going to save everything else 'til tomorrow, except for this one picture. They come to us in and on all kinds of transportation, but never on horseback. This guy trotted past with dog running along side and chose not to stop because he was deep in concentration trying to make a cell phone call as he rode. I liked the juxtaposition. Clearly, we need a hitching post. Wish I could have caught him from the front! 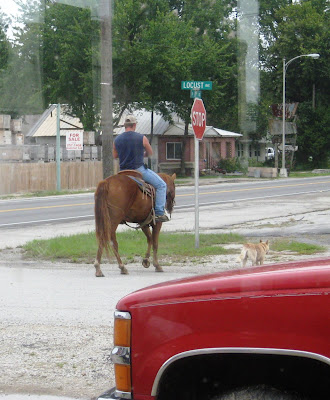 More about today's visitors and progress on "Big Ugly" tomorrow.
Posted by Laurel at 6:22 PM

In this case, I think it really is true, it is the thought that counts. I am sure that they appreciated it.

Yes indeed! That was very sweet of you.

And I thought I'd seen everything when I saw a guy on a motorcycle using a cell phone! LOL!