I lied. My life isn't that exciting, especially today. The photos will prove it. It was a routine day at Afton Station, with the big excitement being that the pieces which will ultimately be the new building are being put together. Tomorrow, David and a crew will assemble the building. 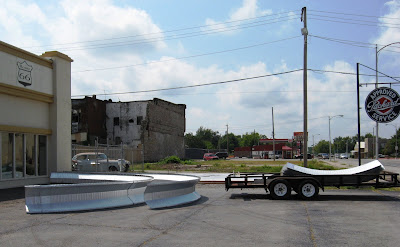 And to add to the excitement.... see that light post in the above picture with the little floodlight way at the top? The bulb has been out for months, and FINALLY today the power company came to fix it. Just in time so the light can help prevent pilfering of the building pieces piled below it in the driveway overnight. I told you I have an exciting life. [Yawn] 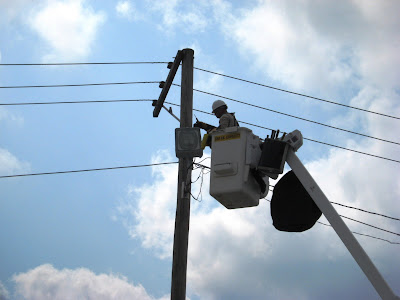 Actually, it wasn't all dullness today at the Station. Betty came for a visit, Marly was there for quite a long time as well, and we had 12 lovely guests, too. One was a deaf motorcyclists from Aurora, IL who missed the official Route 66 Deaf Motorcycle Rally last month, so decided to do part of it by himself this week. Very nice guy, with very few communications problems despite his deafness. We also visited with a family of seven from Wichita, KS, traveling Route 66 to a family reunion. A couple from Ketchum, OK who were out for a little drive stopped in, as well as this friendly couple, Gro and Tom from Oslo, Norway, who are doing the whole Chicago-to-L.A. trip, after spending a couple of weeks on the East Coast. 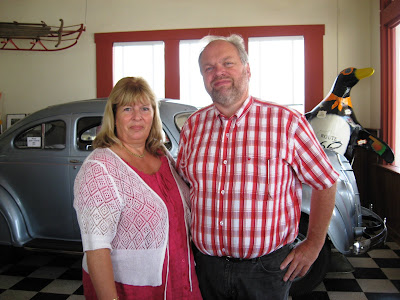 I wish I could have taken photos of my trip to Afton this morning. There was a BIG thunder and lightning storm just ahead of me, traveling in the same direction as me. I got to watch the most magnificent lightning show all the way from Tulsa to Afton, without the inconvenience of having to drive in a lot of rain. It was just stunning! However, I decided (very wisely, I think), not to risk the danger of driving darkness and drizzle while attempting to take pictures through the windshield. My trip home from Afton was just the opposite. . . sunny, balmy, and beautiful in a different way.
______________
Just In: Marly called. He stayed after I left to drive home today, and reports that we had four more visitors -- two from Illinois and two from France.
______________
Correction: The Scottish gentleman who sent the photos of the River Afton which I posted yesterday has told me that the picture I chose isn't quite correct. It's actually the River Nith, where the Afton joins it right there in New Cumnock. Close enough for me! Thanks, Geoff.
Posted by Laurel at 5:37 PM

Sometimes a quiet day is a good day for catching up and catching your breath. Now onto the weekend!

"One was a deaf motorcyclists from Aurora, IL who missed the official Route 66 Deaf Motorcycle Rally last month, so decided to do part of it by himself this week. "


When and where was that? One of my best friends is deaf. And I know some sign language. If that's an annual event I'd like to tell my friend about it. She might like to go.

Trevor -- I don't know the exact deaf group that was doing Route 66 this year, but there are some links on this page that might help your friend.