I admit it right off the top. Ron M., Tattoo Man, and I spent a good part of our day at Afton Station discussing the awards we won over the weekend. We are honored and surprised! Tattoo Man brought Ron M's award to him, and shortly thereafter Mike Pendleton, who had gone to the Festival representing Kansas, arrived with mine. The awards themselves are graceful and made from engraved plexiglass. Tattoo and Mike regaled us with stories from the various gatherings at Flagstaff. Apparently we missed a whole lot of fun, as well as some important meetings concerning the formation of the new Route 66 Alliance, an organization which will, at last, unite all the state Route 66 organizations, while still keeping each state's individual autonomy. Since next year's Festival will be held in our general neighborhood (Joplin, MO) we will be asked to assist in its planning. As veterans of Festival organizing, Ron and I are looking forward to getting involved again. 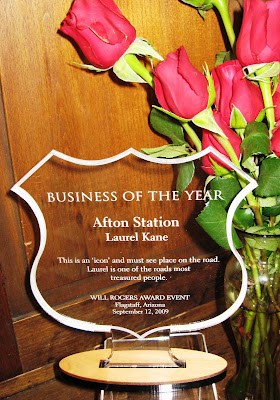 Wonderful Betty brought me a dozen roses today! Here's my award along with the gorgeous flowers. The engraving says: "This is an 'icon' and must see place on the road. Laurel is one of the road's most treasured people." (Blush) 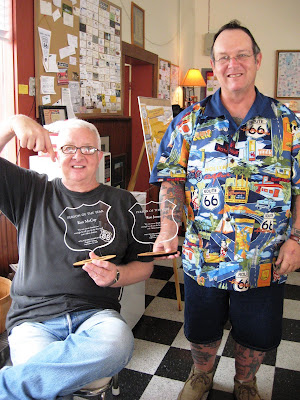 Ron M. and Tattoo Man display their much-deserved "Persons of the Year" awards. Their engraving says "We can never thank you enough for all you do for the road and Afton Station."

Oh by the way, we also had visitors today. We didn't spent ALL day sitting around patting ourselves on the back. Honestly. We didn't. In fact, quite a few folks graced us with their presence, arriving from Skiatook OK, Columbus OH, Vinita OK, Tulsa OK, Justin TX, Shawnee KS, Toledo OH and Amsterdam, The Netherlands. Here are Ron and Jacqueline from the Netherlands who, in an almost unprecedented move by foreign visitors, are driving Route 66 from west to east! 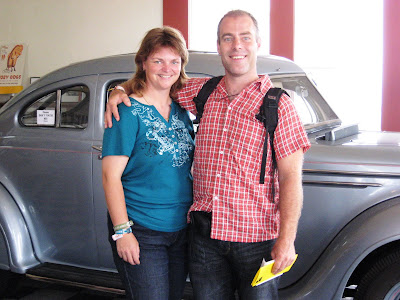 More gifts! If plaques and roses weren't enough, Tattoo Man brought me (or rather, Afton Station) a tile from Pop Hicks Restaurant in Clinton, OK. Pop Hicks was an iconic eating place on Route 66 before it burned completely to the ground in 1999, leaving nothing but the tile floor. Shortly after the fire, David and I visited the site in the dark of night and went into the burned out basement to see what was left there. All we found was a postcard rack, which I now use at Afton Station and treasure as a momento of the historic eatery. But leave it to Tattoo Man! On his way home from Flagstaff, he and his wife stopped at Pop Hicks and Ron chiseled away two of the floor tiles, one for himself and one for the Station. He had no idea how much I've always wanted one of the tiles! He said it wasn't easy to pry the tiles up, and I believe it. It's a very heavy ceramic tile. 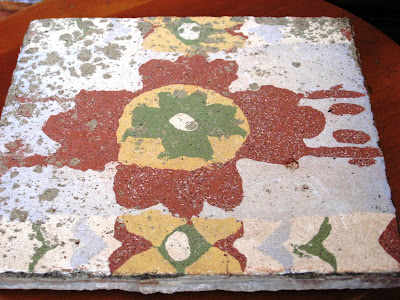 And how cool is this? The floor can clearly be seen in my old postcard of Pop Hicks. Needless to say, I'm excited about this addition to the museum. 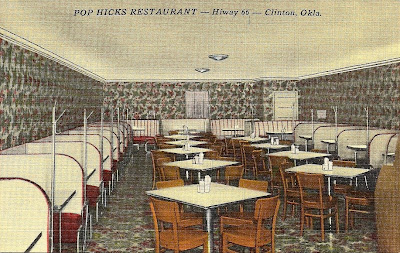 All I can say is that it was another great day at Afton Station, with very little time for relaxation (except maybe for Tattoo Man, who took a little R&R in his brand new chair in his brand new Route 66 shirt....) 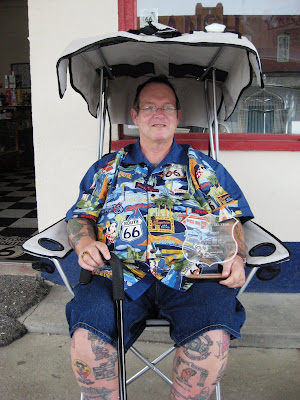 What a beautiful award, and well-deserved!

Great to hear that they are going to unite all the state alliances. There is power in numbers! Hugs, Beth

Love the look of the awards :o)

Go ahead boast some! You've earned it!

Tell Tattoo for me that I'm proud of both of you, and even more proud to have met you both in person.