Lots to talk about today, so I'll get right to it. First, here's a picture of where I would like to have been this weekend, or at least one of the places. These are the folks from our Route 66 Yahoo eGroup who met in Flagstaff, AZ at the annual Route 66 Festival. I've only missed two festivals in many years, and I'm so sorry I'm not there.

The other great event this weekend is the Missouri Route 66 Motor Tour. Between these two events, most of my Route 66 friends are on the road right now. I chose not to go to either one because I couldn't bear having Afton Station closed in September, which is one of my busiest months. The thought of travelers being met with a locked door on a weekend disturbs me greatly.
______________
The "Discover Oklahoma" program featuring Afton Station is being aired about a half hour from now, at 6:30 p.m. Central Time. Those who live in Oklahoma can see it at KOTV-6 in Tulsa, KWTV-9 in Oklahoma City, and KSWO-7 in Lawton. For the rest of you, I'll try to make a copy and get it on YouTube, in case you're interested, and if I don't look like too much of a dork.
______________

We had some interesting visitors at Afton Station today. Ron M. was with me, and most (but not all) of our visitors were local. Local folks came from Bernice, Langley, Commerce, Grove, Choteau, and Jenks, OK and others came from Baxter Springs KS, Spring Hill FL, and Toulouse and Perpignon, France. Ron and I decided that one of the French fellows from Toulouse won the award for "Most Enthusiastic Visitor of the Year". Here he is holding a very thick notebook with hundreds of pages of notes and maps of Route 66 and photos of some of his vintage cars back in France. He said several times that this trip is a dream come true for him and he's been researching it for years. After seeing his notes, I believe it! 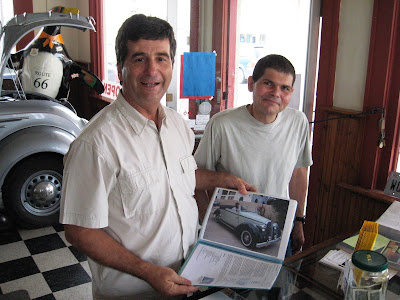 We had another interesting visitor, Charles Duboise from Commerce, OK. He and his mother own the Dairy King, a snack shop housed in an old historic Marathon station in Commerce. We have met before when he and his mother dropped in a few months ago, and I put a photo of their place here on the blog. Charles came in today to give us a gift, two examples of his brand new business, making "Route 66 Cookies". He's trademarking the name and the special cookie cutter molds which he designed and manufactured himself. At this time, the cookies can only be purchased through him at c_duboise@hotmail.com or by calling the Dairy King at 918-675-4261. This picture doesn't really do credit to how neat the cookies are. (Both plain sugar and chocolate chip are available). Charles stayed for a long time and we had some great conversation. For one thing, he was on Oprah a couple of years ago! He was honored by Oprah for running 29,000 miles over many many years in the same Nike running shoes, and in the process lost over 130 pounds. Nice going! 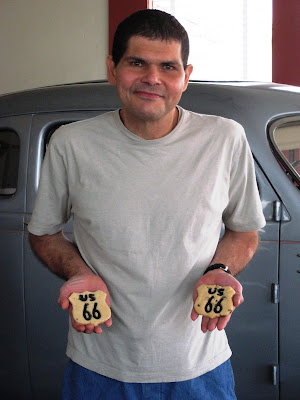 My old harmonica-playing friend Oren from Afton stopped in, and promised to come back soon to give us a little concert. He's really an impressive musician and nice guy.
_____________

Redneckery is alive and well in Oklahoma. Here's the rear of a car that was in front of us on the way to Afton this morning. Is this really necessary? 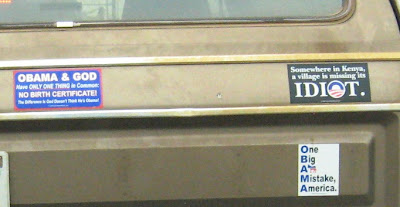 On the other hand, "Frog Leg Fridays" have been announced at Vinita's Wood Shed! Nothing like a big plate of frog legs to temper those disturbing political thoughts. :-) 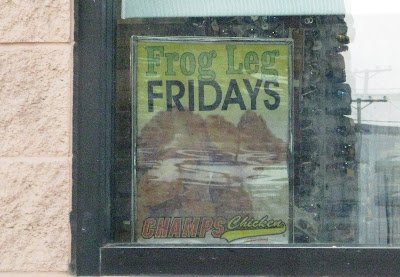 Laurel, the Afton Station segment on "Discover Oklahoma" was wonderful and excellent promotion for Route 66 in general. Good job!

Frog leg friday ??
hmmm we found out that "Tuesday is egg day" in one place we stopped !!

This rather valuable opinion

You don't have to be a redneck to dislike Obama. Just a person's opinion and as valid as those who publicly displayed their dislike for Bush. Alienation of Route 66 fans based on politics isn't necessary.