Today, I have a couple of guys I want you to meet. First of all, here's Cyrus, our new and very handsome do-rag model. Ron M. found him at a hobby store, and he's just what we needed to display my new line of Route 66 biker skull caps. He's a little pale, but he is quite handsome, and best of all, is the strong, silent type! We drilled a hole in one of the pressed pennies just to see if it would make a good necklace. It does, but we need a better method of drilling the hole. When we perfect the process, I'll start selling those, too. Meanwhile, Cyrus (named for Cyrus Avery, of course), is the perfect, well-behaved disembodied head. 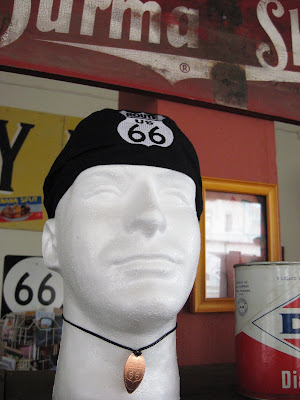 My other featured guest at Afton Station today was quite the opposite of Cyrus. Don Francis from Hinton, OK couldn't stop talking even for a minute. And all of his talk was about the two Route 66 trips he's taken recently. His energy was amazing! Last week I named a visitor from Paris as my Most Enthusiastic Visitor from that particular day. But today, Don Francis won my "Most Enthusiastic Visitor of the Year" award. He was wonderful. His descriptions of the two trips he took with a friend on their motorcycles were hilarious, but they were also filled with details that proved that he soaked up Route 66 knowledge like a sponge on those trips. His very sweet wife, Barbara, hasn't quite warmed up to Route 66 yet, but I predict it won't be long before his excitement for the Mother Road will rub off on her. 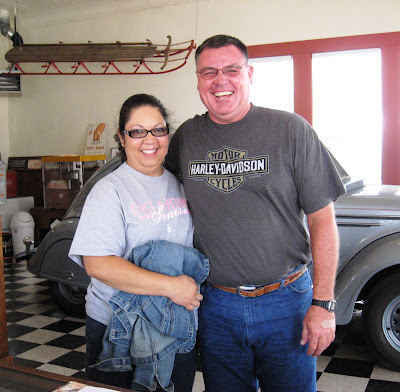 It wasn't a tremendously busy Saturday at Afton Station. There were plenty of guests, but there was also a bit of time for us (Ron M., Betty, and me) to sit outside and enjoy a perfect day. Sixteen visitors came from Spavinaw OK, Holdenville OK, Concordia KS, St. Peters MO, Stillwater OK, Hinton OK, Cincinnati OH, and Springfield MO. The folks from St. Peters, MO were a young couple and their 11-month-old baby who was asleep in the car, monitored by Ron and Betty while I showed couple the Station. It's so nice to see younger people traveling Route 66, and these two young'uns were excited about being on the road. I exchanged good conversation with the couple from Concordia, KS who had several things in common with me -- love of craftsman-era homes and furnishings, the messages on the backs of old postcards, and an interest in all of the quirky places in the state of Kansas.
Ron stole my camera and snapped a few pictures today while I was gabbing with visitors. Here's an interesting one involving reflections. Nice work, Ron! 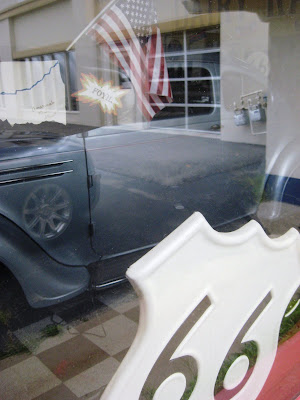 We've seen a lot of geese flying south this week, which of course marks the ominous end of summer. I do love autumn, but I'm not crazy about the days getting shorter. Pretty soon I'll be dark before I get home from Afton. Ugh...
___________
P.S. Hmmm..... maybe Cyrus needs a 'stache and a soul patch..... 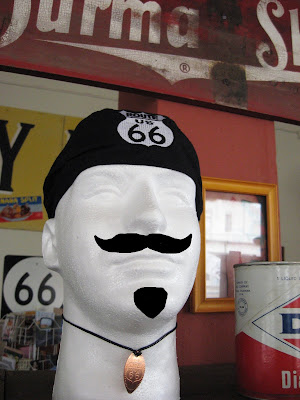 Cyrus IS a handsome fellow. You should be able to get some sort of a strong hole punch that would work well for your squished penny necklaces. Cool reflection photo!

Beth,
I kind of like my men with at least a little tan, but Cyrus has a very nice strong chin.

I think David's drill press is going to be the answer to the penny necklaces.