That's what I've decided to name the building David is erecting on our side lot. Ugly, ugly, ugly... but useful for storage, I guesss. Here it is, about 2/3rds done. Of course it will have a front and a back, but still. . . 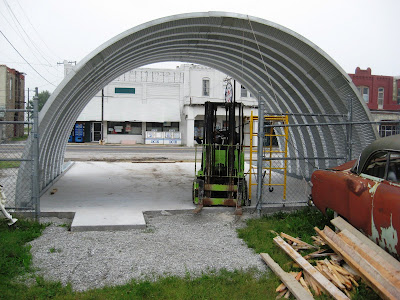 Today was pretty sensational at Afton Station. There were lots and lots of visitors, but none of the pandemonium of yesterday. Here, in no particular order, are the origins of the 43 travelers who made a pilgrimage to Afton today: From Europe -- Marseilles France, London England, Amsterdam Netherlands, and Lausanne Switzerland. From the good ol' USA -- Missouri (various cities represented in a group of Corvette drivers), Mustang OK, Wichita KS, Springdale AR, Ramona OK, Catoosa OK, Vinita OK, Corsicana TX, Chandler OK, San Diego CA, and Chanute KS.

The renowned Route 66 artist, Jerry McClanahan from Chandler, OK and his father Don from Corsicana, TX surprised us with a visit. Jerry is an incredible artist. McJerry66 My ex-husband and I have, over the years, commissioned 4 or 5 of his paintings featuring cars from our own collection. Jerry is also the author of the EZ66 Guide for Travelers, which is universally considered the best guidebook to Route 66. Obviously, he's one of the top experts on all aspects of the Mother Road. I haven't seen Jerry for a while, so it was such a lovely surprise when he and his dad walked through the door. 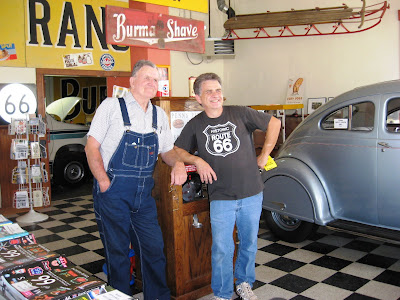 Earlier in the day, we had a very pleasant visit from Jackie and Steve from London, England. I was especially amused by his "Redneck Tech" t-shirt. They bought their shirts at Bass Pro Shops in Springfield, MO. I think Bass Pro is just about the best possible intro to midwest USA for those from other countries. They were amazed by the emphasis put on fishing in this country. Apparently fishing is a far more "civilized" sport in the U.K. I really enjoyed this couple. 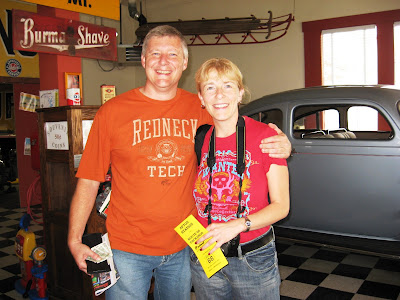 Here's the group from four different towns in Missouri (which I didn't write down) who arrived in their shiny Corvettes. They were heading for New Mexico and appeared to be having an absolute ball on the road. A very happy group! 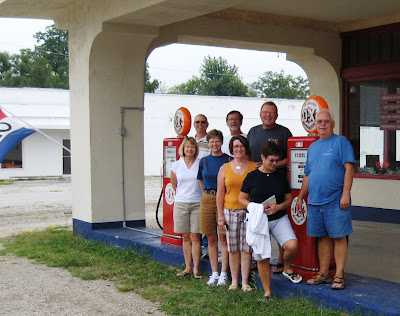 A couple from Mustang, OK came by pulling a trailer full of Studebaker. This beauty is a 1964 Studebaker Hawk Gran Tourino, beautifully restored. They were returning from an orphan car show in Branson, MO. 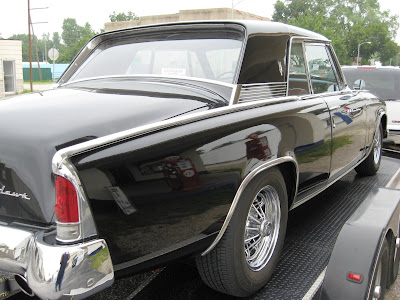 I think that's just about enough pictures for today, but I must close with this one of Ron M. modeling our new line of Route 66 do-rags. Somehow, it just isn't "him". 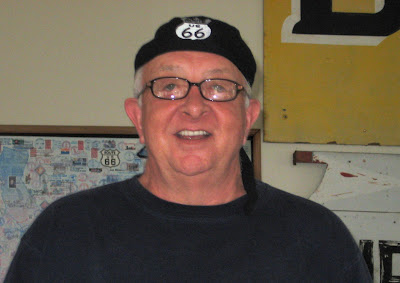 Sounds like quite a couple of days at Afton! Yippee! Hope you're able to get some rest today.

That Hawk is gorgeous!