Yikes, I need a nap. . . or a stiff drink . . . or a psychiatric consultation. . . after a day like today! It was WILD at Afton Station for much of the day. Actually, most of the craziness occurred near the end of the day, which is always the time when it's the most difficult for me to cope. But cope I did! And everything that happened was good, so I'm definitely not complaining. It's just that there were a lot of small kids at the Station today and they were all behaving like small kids, so the day played out against a background of a lot of shrill screaming, running around, and putting fingerprints on everything I'd Windexed earlier in the day. :-)

Ron M. wrestled with his alarm clock this morning and Ron won, therefore he decided to stay home and go to Afton with me tomorrow instead. So, after an uneventful solo trip to the Station, I arrived just about 15 minutes before Tattoo Man walked through the door. Next came Johnny, one of David's helpers who is doing work on one of the vans, so add more noise and foul auto odors to today's mix. After a pretty quiet morning, Betty arrived, and shortly thereafter the visitors started parading in. I guess I forgot that it's a holiday weekend and lots of people travel over Labor Day. Plenty of them found their way to Afton Station.
I had visits from several friends today. Patty, one of the nurses in my dialysis unit, came to check out this place I'm always telling her about. She brought her husband along, and it was a nice surprise to see a Tulsa friend at the door. Also, Carla, another Tulsa friend who is also my housekeeper, arrived later with four of her kids. What fun to have her drive all the way up to give her kids a taste of Route 66! At the very end of the day, Croc and Jim, on their way back from delivering the Route 66 Pulse in Missouri and Illinois came by, but after their truck woes last week, they were so behind schedule that they could only stay a few minutes. I had hoped they'd be able to stay over in Tulsa tonight and have dinner with me, but instead they are planning to drive all night and arrive in Amarillo, TX in the middle of the night. Oh well, there will be a next time.
The visitors just kept pouring in, 39 in all. There were people from Rogers AR, Grainola KS, Bedford TX, Park Forest IL, Bartlesville OK, Banner Ridge MO, Mulvane KS, Goodman MO, Los Banos CA, Winthrop IA, Tulsa OK, Greenville IL, Tonteytown AR, and Paris, France.
Worker Chris and his wife were also here for part of the day, working on the new building. I would have taken some photos of the progress, but I was just eager to get on the road and come home. I'll take them tomorrow.
Now, without further ado, a gallery of a few of today's visitors. It's easier to post photos than write text, and I'm really, really TIRED! 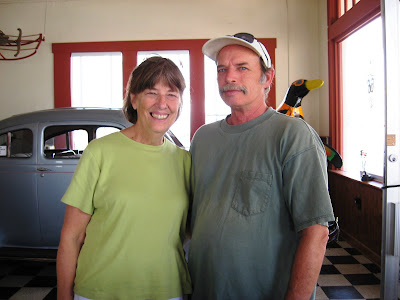 Betty and I had a great conversation with Suzanne and Ed, cheerful visitors from Los Batos, CA who are heading home after a long trip which included New Hampshire and other points in the East. 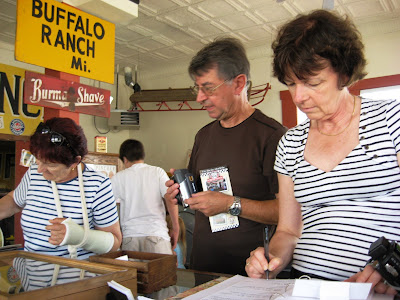 Three of the four French visitors, including the unfortunate woman who broke her arm the day before their trip started. 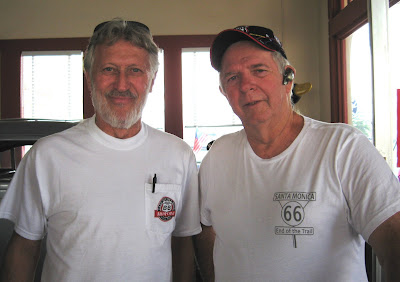 More Croc and Jim. I know I've posted their pictures before, but they're just SO cute! 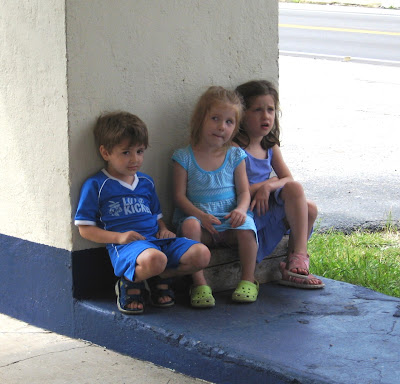 And speaking of cute, here are three of Carla's children and grandchildren who were traveling with her today. 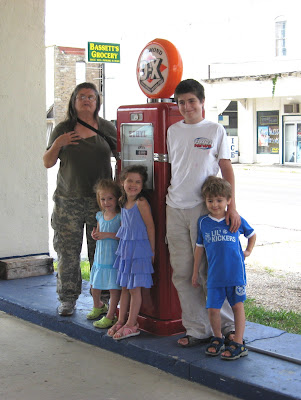 Finally, here's Carla with her second oldest son (the oldest one is in Iraq with the Army), the youngest son, the youngest daughter, and her granddaughter.