They say it rained 7-8 inches last night here in Afton, and it's still raining as I write this. On my drive up here, I saw numerous flooded lowland farm lands. I'm sitting here in semi-darkness (a couple of ceiling lightbulbs are burned out and I can't reach them), watching the rain pouring into the broken windows of the abandoned Palmer Hotel and the Bassett building across the street. Marly came in last night to mop up a small flood in the showroom, but I'm sure more water is accumulating right now. I have a feeling I'll be spending most of the day alone today. Who wants to drive in this?

That being said, there's something magical about a gloomy old gas station on a rainy day. The ghosts come out. Jim, the original owner of what in 1935 was then called the Eagle Service Station, is sitting beside me lamenting what we've done to his place. It's certainly not a day that evokes memories of the Dust Bowl drought, but he's still waxing nostalgic.

"What are all these guidebooks and keychains doing here?"

"What happened to the racks of oil cans and the fan belts and my big old cash register?"

"At least the flies are still here."

"I'm glad the place is still here", he says. "At least somebody is taking good care of the building, even if she is a city slicker from the East coast, and a girl at that!"

He tells me how much he misses the old Route 66, the steady stream of cars going by, and Jack, Abe, and Cliff, the pump attendants, running out to greet every car that stops.

"I'll just get these bugs off your windshield."

"Looks like you'll be needing a new tire before long. Be sure to get it before you get to the desert."

Holy smokes, it's raining HARD! When a semi goes past, the splash reaches almost all the way to my front windows. I want to run outside and stand in it, but I probably shouldn't. Lake Afton, which is what we call the water buildup next to our building, is rising. 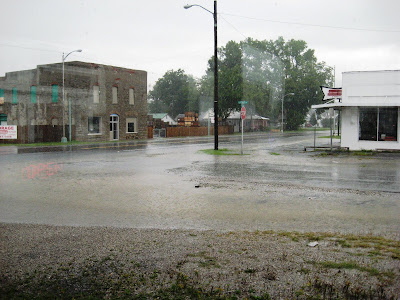 It's now 1 p.m. and I've had only 5 intrepid visitors, all from foreign countries. A father and son from Port Elgin in Ontario, Canada were followed by my new friend Guenther from Bergenhusen, Germany. Guenther stayed for a very long time and we had a marvelous conversation about everything from the difference between donkeys and burros to our shared admiration for Salvadore Dali, and then off he went to California. 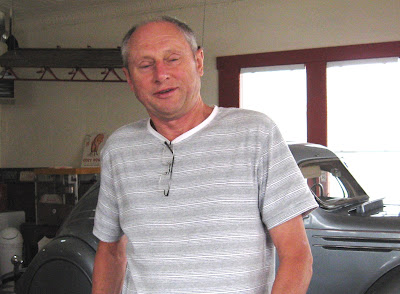 After that, this very handsome couple from the Netherlands arrived, and I was beginning to think that perhaps Americans were just too wimpy to come out in the rain. 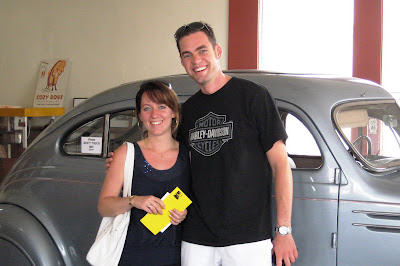 It's 2:30 p.m. now and the rain has stopped. The sun is peeking out, and the Americans apparently got on the road. A couple from San Antonio, TX arrived on a Goldwing motorcycle. Fortunately, they spent most of the morning in areas that weren't being rained on, so they were still cheerful. They're heading off to the "end of the Road" in Santa Monica. Finally, my day ended with a visit from a very pleasant sales person from a billboard company. Yeah, like I can afford a billboard...
______________

As I requested yesterday, Cort Stevens sent me a picture of the front of his head. Here he is yesterday at Afton Station with Bob Waldmire. And now you know what he actually looks like! He communicated from Clinton, OK where he spent last night, saying that his trip is going very well.

Did the folks from San Antonio realize that Santa Monica just celebrated the centennial of the Santa Monica Pier, the symbolic end of Route 66? Below is a link to the headline from the Los Angeles Times on Sept. 10, 1909 for "...the dedication of its municipal pier, which is declared to be the best of its kind ever committed to public use, and unique in many respects." (Note the ad for the Electro-Thermo Dilator which promises to cure constipation while sleeping! LOL!)

Ron, I liked the ad for the "school hat". With wings? No, we didn't discuss the Santa Monica Pier, but I'm sure they'll figure out there's something special going on there when they get there.

Good grief, that's a lot of rain! Glad it cleared up for you, and you got some fun and interesting visitors. Loved your imagining of what the previous owner would think of the station now...sometimes I'm guessing that the ghosts come out.