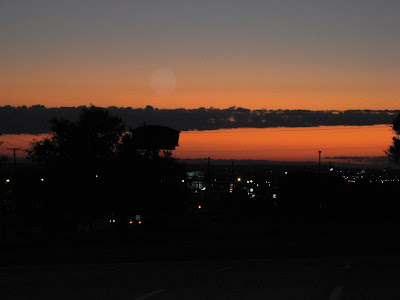 Today's sunrise provided an optical illusion. No, that's not the sun's reflection on a lake. It's dry land, in the middle of Tulsa. The "lake effect" comes from a line of clouds just a bit above the horizon. I thought it was kind of neat.

We had lots of visitors at Afton Station today but they weren't very well-spaced. The early morning was very busy, and then came a long period of nothing. Michael O'Keefe from Long Beach, CA stopped by again on the way back from his trip to Eureka Springs, Arkansas. He stayed for the whole day again, as he did last week on his way to Arkansas. During the middle of the day he, Ron M., and I sat outside and enjoyed the beautiful, albeit guestless weather. Then, later in the day, the visitors started to arrive again. There were 25 altogether, from Fountain Valley CA, Madison WI, Akron OH, Lawrenceville IL, Choteau OK, Rogers AR, Joplin MO, and Fairland, Commerce, Pryor, and Tulsa, OK. There were also a couple who are full-time motorhome dwellers now, but were originally from Oregon.

The gentleman from Lawrenceville, IL was riding a bicycle across Route 66 from Chicago all the way to L.A. He said he was doing it as a total amateur with no training in long-distance biking, but he also said that thus far he's had no problems at all. He certainly seemed to be healthy and happy, and I'm sorry I didn't get a photo of him. We saw him again on the road as we were driving home, but he wasn't in a place where we could stop and wish him well. I had recommended the Chelsea Motor Inn for his lodging tonight, and was very close to Chelsea when we saw him, so I assume he made it there by 5 p.m.

This fellow from Rogers, Arkansas indicated that he reads this blog, so I had to take his picture in front of his nice Miata so he can see himself here. 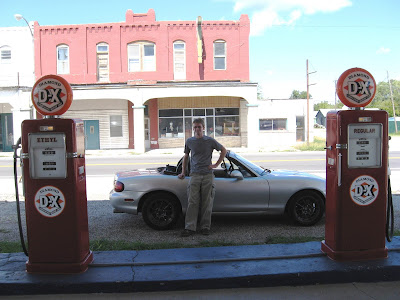 When I first looked at your sunrise picture, I did indeed think it was a lake, with land on the far side. Cool effect!

It probably seems sometimes that it's either a drought or a downpour at Afton! Glad it was a good day with lots of visitors, even if they all came in a bunch! :)