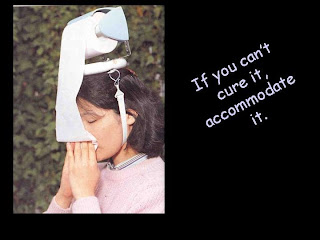 I had big plans for today at Afton Station, that is until I woke up this morning. I had some photos I wanted to frame, taxes to compute, and Ron M. had left me his new Flip Video to play with. But plans don't always pan out, and that's the story of my life on this lovely crisp morning. I woke up feeling. . . well . . . the best I can describe it would be gawdawful! My throat is raw, my nose won't stop running, and there's not a modicum of energy in my body. Yep, a good old-fashioned cold! I rarely get them -- one every year or two at most -- so I need to whine a little about it. Waaaaa. . . I don't want to go to work today! But, of course I must. It's not an option when the business is your own. So, I took a very hot shower and hit the road. And here I am. 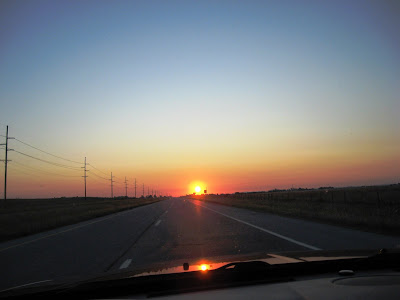 On the way to Afton, I had to stop once in a WalMart parking lot for a quick 5-minute nap. I was falling asleep at the wheel, something that's definitely not recommended. I also stopped for breakfast, which was tasteless.

By 1 p.m. I was feeling quite a bit better. I guess I was yanked from my malaise by all the great visitors I've greeted. Today, they arrived in a well-spaced way, so I got to talk at some length with most of them.

Here's Josh, a young man from Farmington, Arkansas. I was most impressed by him because he is extremely enthusiastic and knowledgable about Route 66, which isn't usually the case with folks so young. He even expressed an interest in finding a building on Route 66 to restore. Of course, I told him all about the buildings across the street. You never know! 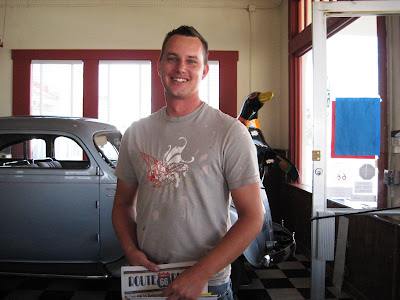 Others came from Claremore, Ponca City, Miami, Fairland and Ketchum OK, Manly IA, Shreveport LA, Gainesville FL, Burlingame KS, Blue Springs and Joplin MO, Seattle WA, and Paris, France. Three motorcycling brothers were just setting out for a Mother Road trip. The families that bike together stay together! Four folks from Ponca City, OK stopped to photograph their beautiful '70s era El Camino before also setting off westward on Route 66. The four folks from Paris didn't mind if I practiced my meager French on them. They also had me sign their travel guides so I got to feel like a celebrity for 30 seconds. A mother and grown daughter were traveling the entire Route together, and said that so far they'd only had one tiny spat. I'm always interested in that, since I love to travel with my daughter. I also had a late-day visit from my friend Perry Knight from Miami, who wanted to show his friend from Burlingame, Kansas the '34 12-cylinder that David allowed him to drive last month.

Here's a picture from the Homecoming at Afton High School. We loaned the '65 Chevy convertible to one of the Queen candidates for the parade. She looks cute, doesn't she? 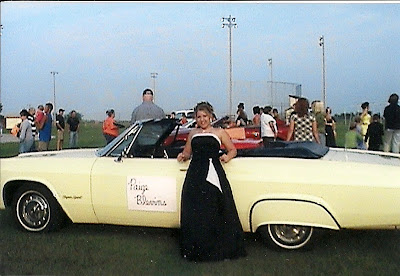 I took one short movie with the Flip Video, but I'll deal with that tomorrow. I'm home now, and pleased to say that I feel 90% better than I did when I woke up this morning. Onward and upward!
Posted by Laurel at 5:10 PM

For some reason, I don't often get colds either. But, my allergies make up for it. Whenever I mow the lawn, I'm sneezing and blowing my nose for a couple days afterward.

I'm glad you're feeling better. I hope you manage to get some good rest tonight, because sleep is essential for getting back to 100%!