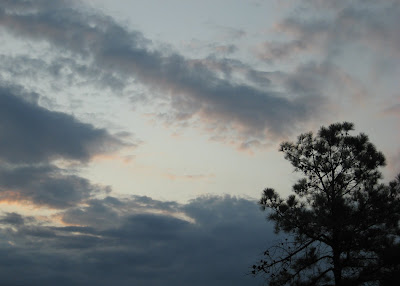 A lot didn't happen at Afton Station today, but then again, a lot did happen, too. Ron M. and I arrived to find the concrete pad was being poured for the new storage building and David was there overseeing the pour. Before any visitors arrived, I got a call from Tattoo Man saying that Jim Conkle and Croc Lyle had been trying to get hold of me to say that, on their mission to deliver all the new Route 66 Pulse issues to the eastern part of Route 66, they ran into car trouble and were stuck in Tulsa. I'd left my cell phone in the car, so they called Tattoo and he called me. They said they'd make it to Afton some time this afternoon but, under the circumstances, they weren't sure when.
So the day progressed, slowly. We had eight visitors who came from Anderson IN, Bolivar MO, Sheboygan WI, and Lawton OK. The Lawton gentleman was a recent returnee from Iraq, having served for a year over there. When I asked if he would be returning, he said "Not a chance!" He's in his late '50s and ready to retire. Since I believe he's the first Iraq vet I've met, I was quite impressed.

At some point during the morning, Tattoo Man showed up at the Station unexpectedly. He decided to drive over from his home to see Jim and Croc when they arrived. But when they hadn't shown up for quite a long time, I decided to call them and they told me that their fuel pump had once again quit on them when they were about half way to Afton, so they were awaiting a tow truck to haul them back to Tulsa. Poor guys!
The only really exciting moment of the day was when we all decided to write our names in the wet cement. Kids will be kids, right? So Ron, Tattoo, Betty, David, and I all autographed the slab. Our names are now forevermore engraved on the side of Route 66. 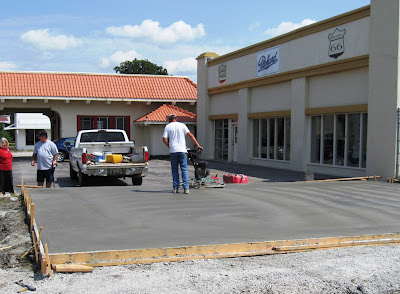 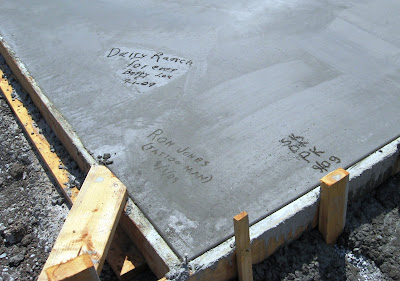 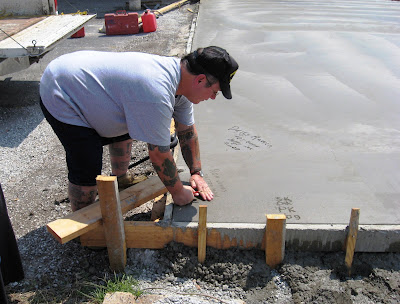 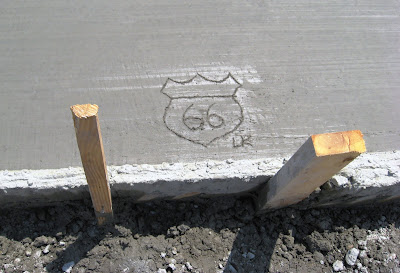 This one is mine.

On the way home, I called Croc and Jim again and found that they had arrived back in Tulsa via tow truck and the truck was being fixed, so we stopped there to say hi to them, pick up three hundred copies of Route 66 Pulse to distribute at the Station, and make sure they would be able to get back on the road and continue their trek tonight. The fuel pump was being quickly replaced (again!), so we wished them well for the remainder of their trip, and I dropped Ron M. off at his house and headed for home, which is where I am right now.

Who could NOT make your mark in fresh cement? I would have done the same thing! :)

I have an idea!

You can start the Route 66 version of Mann's Chinese Theater! Any Route 66 personality deserving of immortality can put their handprints there!

I'll be up this weekend to put mine.

Come up this weekend, Trevor, but don't hold your breath about putting your handprint in the cement. It's hard as a rock by now!