A very nice man named Mike Turvey made this video of Afton Station when he visited in July. He was kind enough to send it to me with permission to post it here. Thanks, Mike!
Another very nice man named Ron M. (remember him? Ha ha) took this creative photo when he was roaming around the "parts cars" (also known as junkers) in our back yard. Apparently even after a car is ready for the wrecking ball, the Dashboard Jesus continues to look after it! 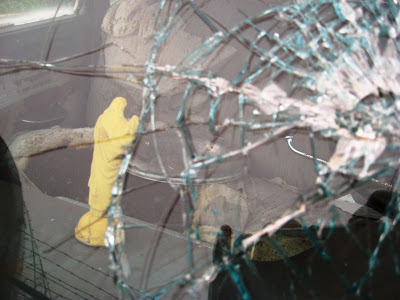 While going through some old papers, I came across another sheaf of poetry I wrote back in the days when I'd sit in Afton Station all day without seeing a single visitor. Loneliness does weird things to the mind, and the wail of a train whistle adds to the weirdness. 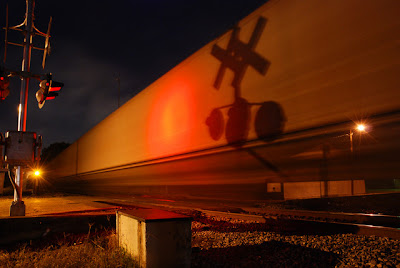 A train can't sneak through a town at night.

I've never lived on this side of the tracks

Or that side, for that matter

But the women who do live trackside

Must know that rumble

Better than the night noises of the men

Who lie beside them.

They can tell time

By the first far-away shimmering growl

The approach, the climax, and then

The disappearance into the night.

Do they understand this?

Barely worth a notice,

A roll over and a lullaby back to honest sleep?

Nice of Mike to send the video, it was sweet :o)

Love the poem, too. Nicely atmospheric, sort of melancholy, but trains always make me feel a little melancholy for some reason.

The poem about the train was good. Incidently, a passing train is what got the late, great Les Paul interested in the science of acoustics. Home sick from school one day, and passing train was vibrating his bedroom window. He was curious why.

So, the electric guitar was inspired by a passing train.