This vintage photo was found on an Ebay site which is selling an old Route 66 sign. From the look of things, it was taken not far from Afton, somewhere where Oklahoma Routes 60 and 66 ran together, as they still do. What a great shot!!!!!!!!!!! 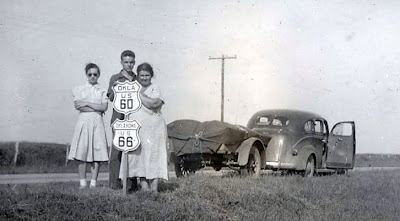 Although I visited with 15 people at Afton Station today, it was still rather slow. That's because twelve of the folks all came in together in the morning -- two families, four adults and eight children. They were from Wichita, KS and on Spring Break. The kids were cute and impeccably polite and well-behaved. Two of the little girls were very interested in the old school desk and asked to sit at it. But of course! Photo op! 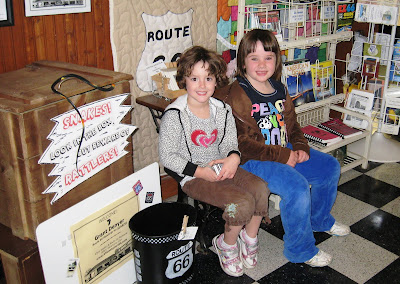 Other kids loved the stickers, and they ended up buying quite a few. They also made pressed pennies for all. 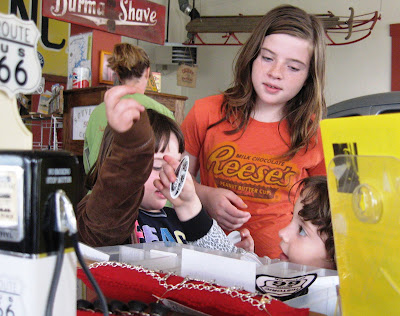 Three people from Emporia, KS came in shortly thereafter, and that was all for the day. That left lots of time for me to stew over a few matters, which I'll burden you with below. When Marly arrived at 2 p.m. and warned me of some bad weather coming, I left early and headed for home. The wind was so strong it kept trying to blow my little Subaru off the road, and yet by the time I arrived in Tulsa, the wind had died and the sun was out. Go figure!
____________
SPRING RANTING SEASON
A) Long before I tied myself down with Afton Station and dialysis treatments, an idea was forming in my mind and taking hold rapidly and with fervor. I was going to travel Route 66 and ferret out all undiscovered gems of the road, and then write a guidebook that featured just those people and places. It would either spread more widely the word "icon" as it relates to the Mother Road or do away with it altogether. This was even before I lived on '66 or had a business on it. Just from my travels on Route 66 and reading books and magazines about it, I was clearly feeling that the "icon" designation had been overused in three ways: to describe a long-running business, to describe a colorful person, and to describe an eye-catching neon sign.

My philosophy has always been that there are hundreds -- no, thousands -- of people and places along Route 66 that are undiscovered or unheralded, so they don't fit into one of those "iconic" categories. There are businesses that are owned by diehard, super-committed Route 66 activists that are failing because travelers aren't aware of them and they will continue to fail until they are unearthed and spotlighted. If you feel that "icon" is a title that must be earned, I agree with you. So, let's give others a chance to earn it. The Top 20 persons, places, and things on Route 66 have definitely earned their accolades. All well and good. I adore these people and things, too. But folks, there are others that need to be given the chance to shine, so let's give them that chance by finding them, visiting them, and telling others about them. Visit places you don't find in the guidebooks now and then. I'll bet you'd be surprised and delighted by what you find.

B) Speed is the enemy of Route 66. It kills people -- we know that -- but it also kills much more than that. On a personal level I'm sure Afton Station is overlooked by many travelers as they race through town at 50 mph (in a 35 mph speed zone). They travel without guidebooks (their first mistake) and a little town like Afton can seem like no more than a wide place in the road if you're whizzing past looking straight ahead. I often joke that nothing short of a roadblock, or throwing myself in the path of a speeding vehicle, will get some people to stop. On the other hand, those who proceed slowly, with or without guidance, are far more likely to to notice our nicely restored and architecturally interesting building and others all up and down Route 66.

C) Destruction -- Don't build a new building if you can restore an old one instead. Just don't. Don't tear down an old building until you're sure it is beyond repair. There are so many out there that need saving.

Ok, I'm done. Sorry 'bout that. It's what goes through my mind when I have too much time on my hands.
Posted by Laurel at 4:44 PM

I'll second sister Susan... Esp about old bldgs... We live in an 83 yo Craftsman Bungalow... And love every sq foot of it.... BTW restored to 1929 era..... Every Xmas I sit and wonder what tales the old walls could tell if they could tell..

Those people are possibly just going from point A to point B.

I also don't understand people who stop, take a picture, then go. They are driving Route 66, not experiencing it. They'll have no stories to tell. They won't learn about some other sites they may not know about. I know that I was unaware of Route 66 Vintage Iron in Miami until you told me about it. Other people may not know about Darryl Starbirds Rod and Custom Car Museum, but they would if they would just go inside your place.

Thanks for agreeing, Sister Yates and Br. Grump! I really think this stuff is important, and I'm glad to know others do, too.

Grump - I'm with you completely. I now live in a 1915 Craftsman Bungalow! Love it. It's actually one of the newer homes I've lived in. We lived for 15 years in a 1705 saltbox in Connecticut and 3 years in an 1825 PA stone farmhouse near Philadelphia. Love those old homes.... and all old buildings!

Trevor - You KNOW I agree with you! The "drive-by shooters", as we call those who take a photo and roar off, drive us a little bit crazy at Afton Station. But at least they're on Route 66. That's a start, although a lame one.

I'm going to chime in again, too--and with what I'm afraid will be a rather lengthy reply. Among many wonderful experiences I've had on 66, one of the best happened, as these things often seem to do, totally by chance--and we very nearly missed it. Friends from the UK were here this past summer and we'd set a goal of driving all of Oklahoma 66. We were on the last leg of the trip, a drive from OKC to Texola in one day (then all the way back to Tulsa on the super slab) and as usual we were way behind the time estimate because (as usual) we had spent more time everywhere we stopped than we intended. By the time we got to El Reno we decided we'd regretfully give old Fort Reno a miss, but the closer we got to the turn off the stronger the feeling became that we really needed to at least get a look at the place and take a few of those maligned (deservedly so) drive-by photos. But when actually saw the place we just couldn't do it and decided we should at least take a look at the gift shop and visitor's center that's housed in the old officer's building and that's where we found a delightful volunteer who told us the most fascinating stories about the Fort's history, some of them involving her family. She wasn't a museum docent or a tour guide. She was just working in the gift shop, but she loved the old fort. We ended up chatting with her and listening to her stories for an hour(an hour we thought we didn't have to spare) and we drove away wishing we could have stayed longer. We were this close [] to missing what turned out to be a real highlight of the trip. And we would have missed it if we'd just shot those pictures and driven on.