Lots of Brits, one Korean, and NO down time today!

Hmm. . . .[scratching head]. . . was it just two days ago that I was complaining about boring days somewhat devoid of Afton Station visitors? Well, I take it all back! Big time! Today was crazy busy! I arrived at Afton Station at 7:30, as was the plan. I was to meet with a British film crew who was coming to film a commercial at the Station, and Ron "Tattoo Man" Jones arrived around the same time, as he was to be the star of the commercial. I don't think we were ready for the huge crew that arrived shortly thereafter. There were 19 people, six very large rented SUVs, and TONS of equipment! Within minutes, the crew was basically dismantling the Station and reforming it to meet the needs of their shooting plan. They moved things around, hung a quilt on the wall, changed the bulbs in our lighting, unpacked sound equipment, positioned some monitors, a boom mike, big lights, etc., etc. After about an hour, they were ready to film Tattoo, and when they finished with him, it was my turn. They had to stop shooting when I dissolved into laughter at being asked if I liked truckers. I just thought that was a rather random question, don't you? Anyway, they were at Afton Station for over three hours of pure chaos, but to be honest, it was rather fun. There were lovely, polite, caring people on the crew and a very competent director. I hope that some day we get to see this 30-second commercial! By the way, the production company was called Hungry Man Productions out of London. 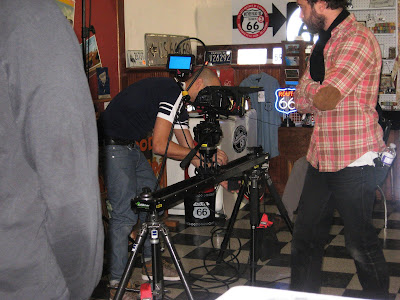 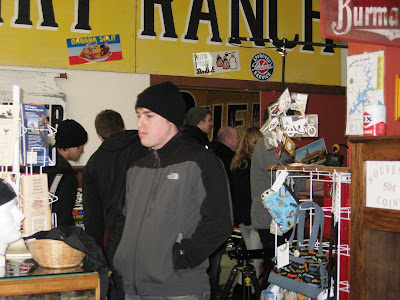 Some crew members milling around 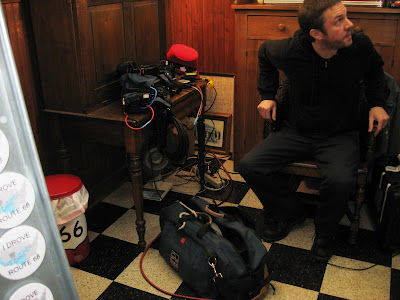 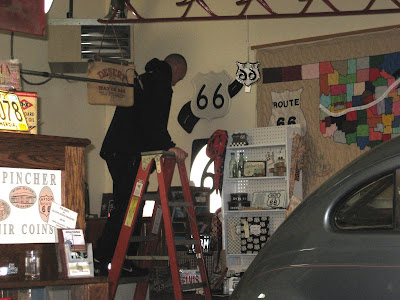 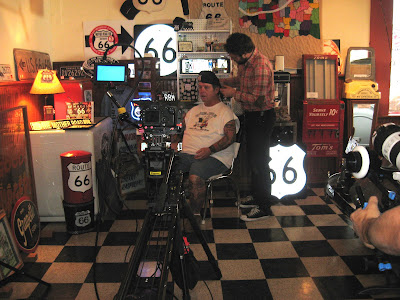 Getting Tattoo primped for his close-up... ha ha!

Of course, there were other visitors as well. Altogether we met with 29 people today. There were travelers from Mesa AZ, Katy TX, Newark NJ, Tulsa, Grove, and Sand Springs OK, and a most delightful and interesting fellow from Seoul, Korea! Ku Lee is pedaling his bicycle across the country, from San Francisco to Boston. . . and then back to San Francisco via Canada. He anticipates about 100 days in each direction, and today he was riding in cold, damp weather. What a charming man! While he was there, my friend Mary Graham from Tulsa (Ron M.'s neighbor and friend) dropped in on her way home from a Kansas vacation. Ku stayed for about an hour, showed us the photos he's taken thus far on his cross-country odyssey, and Mary provided him with lunch, since she just happened to have yogurt and banana bread in her car. (I'm such a bad hostess that I didn't have anything at the Station for the poor guy to eat). Then he was off again, heading for Springfield, MO, his next stop. 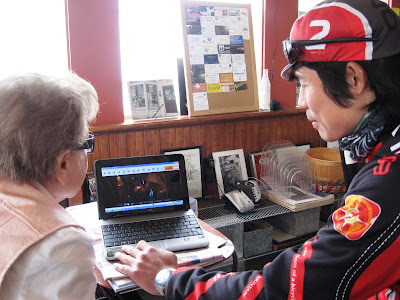 Ku showing us his photos
Posted by Laurel at 4:46 PM