The "Signs" of Spring

Upon opening my email this morning and cruising through a couple of blogs, I found two mentions of brand new signage on Route 66 in Tulsa of which I wasn't previously aware. So, thank you to Susan Yates and Ron Warnick for cluing me in on these new developments.

On my way to dialysis this morning, I drove past the still-under-restoration Hotel Campbell on 11th St.. On his wonderful blog Route 66 News, Ron has photos of the new neon which he shot last night at dusk. The photos I took this morning were in the pitch dark, so they aren't as nice as Ron's, but I was just happy that the sign was lighted at 5 a.m.! The 1927 building will reopen as one of the few luxury hotels directly on Route 66 in Tulsa. 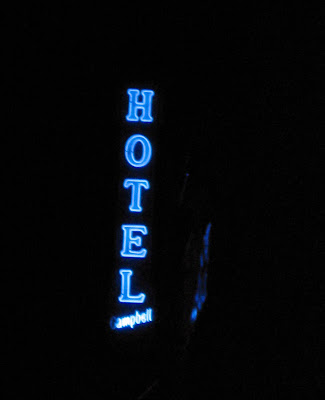 An email from my new friend Susan Yates told me about the recently erected sign on Southwest Blvd. (Route 66) in the Red Fork neighborhood on the west side of Tulsa. So, of course I had to drive over there right after I left the hospital in hopes of taking some photos. Unfortunately, that was not to be. Massive construction occurring directly in front of the sign (which is across the street from Ollie's Station) involving construction equipment, orange cones, and a gaggle of at least a dozen highway workers taking a break in front of the sign prevented me from stopping. Parking was impossible. So, with her permission, here's Susan's photo of the brick sign introducing travelers to Historic Red Fork. 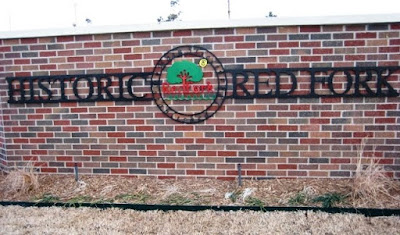 Tulsa has always been a good Route 66 town, but lately it has been ramping up its recognition of Route 66 more and more, and these two signs are a nice, visible part of that increasing enthusiasm.
Posted by Laurel at 1:23 PM