Ron M. and I drove to Afton this morning, and Tattoo Man met us there. The plan was to meet our friend Bob "Crocodile" Lyle and his roadie buddy from Eagleriders Motorcycle Tours, who were passing through on a Route 66 trip. Unfortunately, we found out early in the day that Croc was significantly behind schedule and wouldn't make it to Afton until after we'd left for the day. Drat! We were really looking forward to their visit, and hoped that the Eagle Rider gentleman would tour our place and agree to choose it as a stop on their tours this summer.

We hung around most of the day anyway, and I was rewarded by a visit from my old friend Jim Griffin from Florida, who is in the process of moving to Tulsa. He had spent the night with David and was heading to Tulsa to make last arrangements for the purchase of a house not far from me. I'm truly thrilled about this.

There were only two other visitors today, a couple of guys from Bartlesville who saw Tattoo's very recognizable car and came in because one of them had known Tattoo from years ago. Betty W. stopped by, and Marly was there all day working on the new showroom.

These guys, dressed in spaceman-like hazmat suits came to spray the insulation on the inside walls of the new showroom. Good. One step closer to finishing. 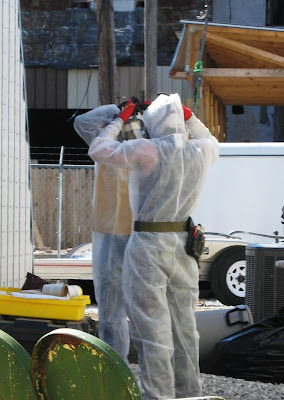 The following photo is of a small Statue of Liberty holding American flags. It appeared on the apparently stalled building project across the street. We sincerely hope that it's not considered to be a "topping off" symbol that would indicate that the building is done. It could use some walls and a roof. No tellling what's going on over there. 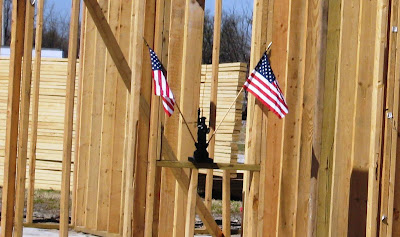 Saturday should be a good day at Afton Station. It's predicted to be warm, and it's the start of Spring Break for many local school districts.
Posted by Laurel at 4:47 PM