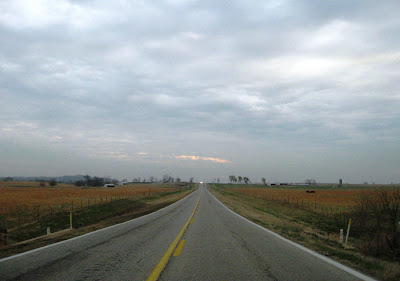 It seems that about once a year I have a day at Afton Station when I'm alone and it's cold and dreary and I have a lack of guests. I sit here, shivering because the heat just isn't adequate to overcome my chilled-to-the-bone condition, and I pretend I'm a martyr to some lofty cause. Of course, I know this is entirely unhealthy, and the other 364 days of the year I avoid self-pity like the plague, but every now and then a girl has to wallow in self-indulgent misery to make up for the bliss she feels the rest of the year. Today is my bleak day. My once shiny floor (thanks to Robin) is now covered in mud tracked in by Sunday's film crew. Someone has upended a box of about 300 postcards and they are now all out of state order. When the film crew pulled the quilt off the wall, the tiny paint chip they took with it looks like major damage in my unsettled brain of today. In reality, it's barely noticeable. I refiled the postcards and put a semi-angry note on the box, telling folks to put them back where they belong in the future. 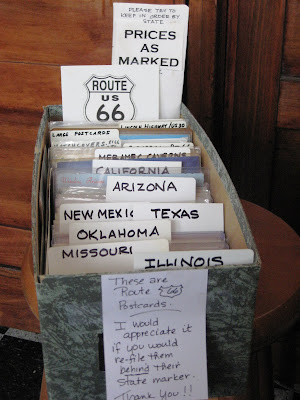 I read a couple of catalogs to keep from falling asleep, then figured out last month's sales tax. That was easy since I sold almost nothing in February. I ate three Girl Scout cookies (the lemon filled kind) and an apple, but I'd have preferred some Greek yogurt, an orange, or a grilled cheese sandwich, all items that are strictly forbidden on my kidney diet. That put me in an even more rotten mood. I need to stop writing this now, lest you think I'm an ogre. I'm not. I'm just having a bad day. Now for the good parts. . .
_____________

Things looked up in the afternoon, after I'd already written the above. For one thing, Betty W. came for a visit. It's been a few weeks since her last visit, so it was great to see her. Also, the rain through which I drove going to Afton this morning has let up, and there seems to be some hope for the weather.

I did have a few visitors today, 7 altogether. A very nice couple from Bloomington, IL was there when I arrived this morning, even though I was 45 minutes early. They couldn't have been more interested in Route 66 and what we have here. Later in the day, just as I was closing up, four folks from Washburn, MO stopped by on their way to a short Route 66 tour. Also, a gentleman from Afton stopped briefly mid-morning.

Finally, the crew from the Town of Afton arrived with their front loader and other equipment and started digging up the spot where the underground pipe has been leaking for years. Could it be that they actually might fix it this time? Even our Mayor Harrison was there observing the work!
Posted by Laurel at 5:10 PM

Proverbs 15:13 A merry heart maketh a cheerful countenance: but by sorrow of the heart the spirit is broken.

Proverbs 17:22 A merry heart doeth good like a medicine: but a broken spirit drieth the bones.


Keep your spirit up, Laurel. Cruisers will be coming out of hibernation any day now.

Laurel, thank you so much for your visit and kind comment on my Backroads Photoblog. I take my camera everywhere I go and have a huge collection places along the road across rural America. I do plan on another road trip up that way and I will certainly stop in to see you! I think when I took this picture, it was a Sunday.

Wildstorm - Thanks for your nice and quick reply! I do hope you'll stop in some day when we're open. We are open most days, including Sundays, but we close rather early, at 3 p.m., because I have an 80-mile commute to get home to where I live. But I did appreciate what you said about Afton and my little museum. I'll be visiting your blog often.
Laurel