The Ides of March in Afton 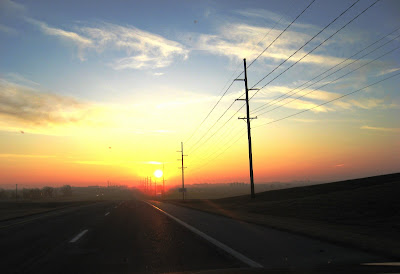 Sunrise on the Ides of March

I'm glad I went to Afton today. It's beginning to feel like spring, despite an unseasonable chill in the air. There weren't a lot of visitors, but the 12 who did walk in the door were certainly interesting!

First came a local pastor soliciting funds to start an abstinence group for local girls. I declined. I'm not really sure that teaching abstinence to teen agers is worth anyone's time and breath, and I'd prefer to see it offered for both boys and girls. It takes two to tango, you know.

David arrived next with his 10-month-old, 100 lb. "puppy" named Mac. We chatted for an hour or two, which was nice since we rarely get to do that. David then went down to the Town Hall to speak to Mayor Harrison about getting the broken water pipe in our parking lot fixed. It's been making a muddy mess of our property for several years, despite many requests for the town to fix it. This time, the mayor said that the town ditch digger was broken and they're not sure when it will be fixed. Translation: It will be done "when they get around to it". Hidden Meaning: Never.

A very lovely and knowledgable couple from London, Ontario Canada arrived next. They collect and restore Brass Era vehicles (first decade of 20th century) and were headed for a car parts swap meet in Chickasha, OK.

When I lived in Grove, I frequently visited the local emu ranch and got to know the owner, Linda, quite well. But since I moved to Tulsa, I've not seen her. Today she came to Afton Station and brought her family with her -- daughter and son-in-law from Seattle, WA and daughter and son-in-law from Stillwater OK with their three little girls. It was nice to see her again, even though she told me she's thinking of closing down the ranch. It was such a nice place, and the shop was full of cool stuff such as emu meat, emu lotions and potions, and other gifts.

My final visitor was undoubtedly the most interesting. He was Tasuku, a young man from Japan who has been living in Milwaukee, WI for the past two years, having been sent there on business. When I asked what part of Japan he came from, I was holding my breath hoping his home town wasn't affected by the tsunami. Unfortunately, it was. His eyes welled up as he told me that his family and "most" of his friends are ok, but several friends are missing. His home town was about 50 miles from the hardest hit area but, he said, is mostly in ruins. When he finishes his Route 66 trip in California, he'll be flying home to Japan for good. I wished him a good trip, but I'm sure his thoughts of home will overshadow any real fun he had expected to have on this previously planned ride on the Mother Road. My thoughts will be with you, Tasuku. 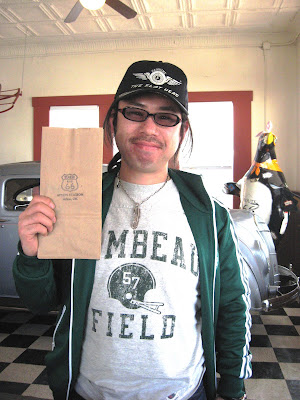 Tasuku
Posted by Laurel at 4:55 PM

God be with you, Tasuku.