There is a wonderful DVD of Afton, made quite a few years ago, and Betty W. has given me a copy. The first third of it is a tour of town given by Tom Bassett, the father of our friend, the current Tommy Bassett. I believe the video was made in the '70s or '80s but I could be off by several years. It features a number of buildings which are now gone or altered.
Betty W. has been trying and trying to get the DVD made into a format which is compatible with Blogger, and Ron M. has been working on the problem, too. It's a very long DVD, for one thing, so it can't just be thrown up on YouTube or even Vimeo. So, until this problem is solved such that I can link it up here on my blog, I've been doing something I haven't done since the Gulf War (the first Gulf War!) -- that is, taking photos of my screen while pausing the video. Besides this being a very nerdy thing to do, the quality of the photos is awful because I can't figure out how to turn off the flash on my camera, other than to just put my finger over it. I guess that makes me a rare dual personality -- a nerd who has little or no technical sense. :-)
Nevertheless, I am going to post some of the photos here. 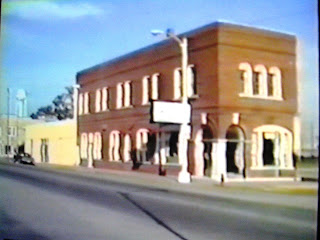 The old bank building on the corner of 1st and Main. It no longer exists, and the bank built in it's place is just a featureless box. 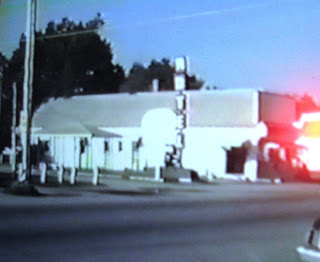 Can you see the MOTEL sign at the center of the picture? The description from the DVD indicates that the motel was no longer there when the video was taken, however the sign was. The sign no longer exists, and I have no idea of the name of the motel which was in that location. 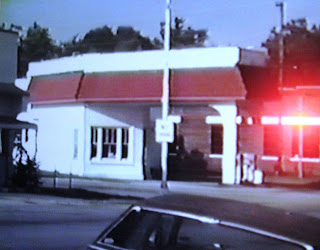 Although this looks a bit like Afton Station, it is not. This is the old Phillips station which is several blocks down the road. It still exists, but is unrecognizable since it has been covered over with metal sheathing. What a shame, because its spade-shaped office is, from what I'm told, extremely rare. 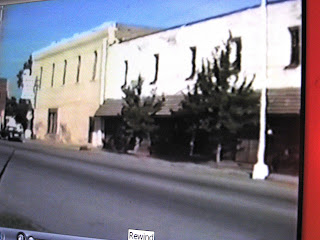 This is the building that was recently torn down to make way for the new one they're building now. According to the video, it was once a grocery store and also "the town basketball court". Not only is the building gone now, but so is that nice row of trees. 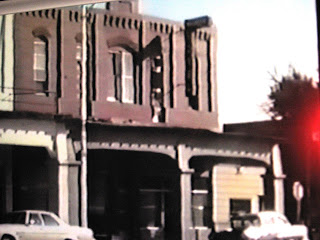 The Palmer Hotel still stands directly across from Afton Station, but in this photo it appears there are no broken windows. I don't believe it was occupied at the time of the filming, however.

Some day, I hope to be able to show you the video. Along with the tour of town at the beginning, some of the "old timers" from Afton are interviewed. It's quite wonderful!

Hope to see the Afton video soon. In the meantime, thanks for the screen shots.