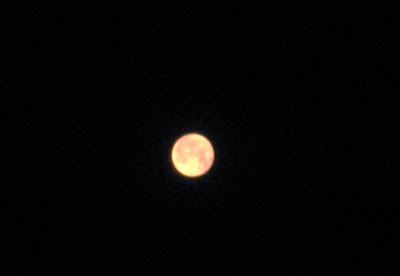 Yes, the above blob is the Supermoon, as memorialized by my little Canon point-and-shoot. It was too cloudy to see it last night (ok, I confess I was already in bed before dark) so I snapped this picture of it early this morning. Exciting, isn't it?

Ron M. and I were anticipating a big day at Afton Station today. It was over 80 degrees by afternoon, with quite a strong breeze, an absolutely perfect day so we were able to sit outside for a while. The morning, however, was quite disappointing. After David arrived with four people who wanted to see the vintage Packards, we had a very long dry spell. The four guys with David were from Scranton, AR and Grove and Tulsa, OK. When they left we twiddled our thumbs for a few hours. Must be time to take goofy pictures! Here's a new snake that has recently invaded our Snake Box. So far, he seems fairly docile, but beware when opening that lid! 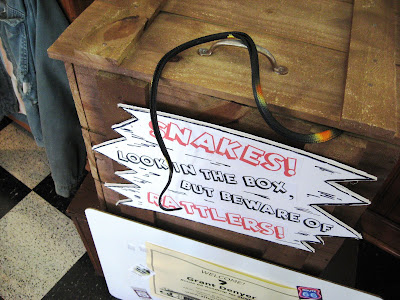 When you take a picture of your lunch, particularly when it's as sparse and nondescript as this one, it's a clear sign that you're bored. Carrots and grapes on a paper plate! Sorry, Ron M.! I usually treat my volunteers better that, especially considering that YOU provided the carrots and grapes! Oh well, they go well with the purple and orange paper plate. :-) 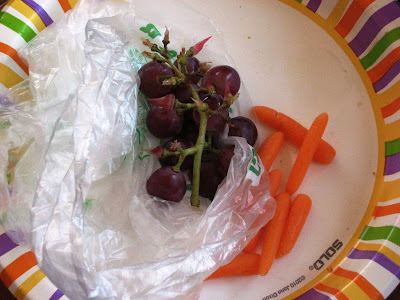 Kelly Ludwig, a young woman from Kansas City, has developed a Route 66 app for the iPhone! She and her friend from Lee's Summit, MO were traveling back home from a trip top Tahlequah, OK and found themselves on a short stretch of Route 66, so they stopped in to Afton Station to meet us. The app, entitled "Road Trip 66", costs $3.99, and it sure seems worth the money. We installed it on my iPhone on the way home from Afton (rather, Ron installed it while I drove) and it looks good! http://bestroadtripever.com/route66 I haven't had a chance to spend any quality time with it, but the small demonstration Kelly gave us at the Station was enough for me to be impressed. Ron Warnick reviewed it in February here: “Road Trip 66? iPhone app released « Route 66 News. Kelly told us that it now incorporates the National Historic Route 66 Federation's recently released the "2011 Dining and Lodging Guide" as well. Here's Kelly, taking some more shots. 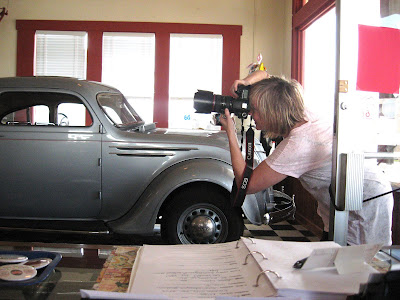 The anticipated visit from the men from Rogers, Arkansas never materialized, but it was a fine day on Route 66 anyway. . . as usual!
Posted by Laurel at 5:29 PM