It's easy to tell when I have a very slow day at Afton Station. I become introspective. Today was such a day, so bear with me.

But first, the particulars of the day. . . 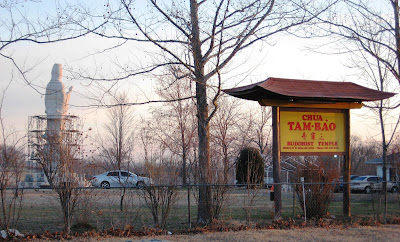 On the way to Afton this morning, I decided to drive east via 21st St., which runs parallel to Route 66 (11th St.), but a mile south. My friend Denny Gibson, who tends to plant ideas in my brain, told me of Tulsa's latest BIG thing, which he read about on the internet and which, somehow, I missed here in the local news. The Tam Bao Buddhist Temple is erecting a statue on it's property. The statue represents Quan Am Bodhisattva, the embodiment of compassionate, loving kindness.


Made in Vietnam, it's 57 ft. tall and weighs 400,000 pounds, and the abbot of the temple says it's clearly visible for miles along 21st. That might be a bit of an exaggeration, since I didn't see it until I was very close to the temple, and then I found all the gates closed, so this is as close as I could get. The scaffolding indicates that it's still under construction, so perhaps when it's finished the public will be admitted to the temple grounds. Meanwhile, our Tulsa Golden Driller has a new giant friend! Read more about it at http://tinyurl.com/4qxxtst .


Except for an hour visit from Betty W., I was alone at Afton Station today, and I was more antsy and bored than usual. There were 7 visitors, which afforded some bright spots in an otherwise very ordinary (or maybe even quieter than ordinary) day. My visitors came from Duluth MN, Ft. Worth TX, and Vinita and Quapaw, OK. The Duluth folks were embarking on a long Route 66 trip but the others were either locals or just in the area for other reasons.


This gave me plenty of time to muse about an editorial in today's Tulsa World entitled "Above everything, a sense of place" by Paul Greenberg. Despite it being a difficult term to define, I understand it, I think. A Sense of Place. Do I have it? Will I find it? Is it even mine to find? The one thing I know is that I want it. I also know that, of all the places I've lived and visited, I've never felt so grounded, so at one, so almost-all-knowing, so psychologically enriched, so soulfully full, as I feel in the 80 mile stretch between Tulsa and Afton. Greenberg says that, to those who truly have a "sense of place", it is "obdurate, understood, so natural that there is no need to mention it". Well, I'm mentioning it. Does that mean that what I feel for my 80 miles might be less a sense of place and more just obstinate familiarity? I believe I'm on the edge of finding, and claiming, my sense of place.

Thanks, Laurel, for the information about Tam Bao temple. Hopefully we will be able to get a close-up look the next time we are in the area.
Let's hope the gas price will be stabalized as not to discourage Route 66 travelers.
We enjoy reading your blog. Thanks for sharing. Keep up the good work of blogging and also keeping history alive at the Station.
Regards,
T-bird
St. Louis, Missouri