A Checker, Some Traffic, and Rick 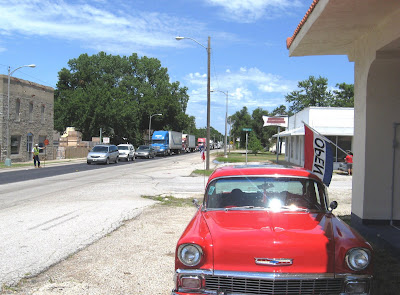 No, that's not the line of cars and trucks waiting to turn into Afton Station. I wish it was! Instead, it's the result of a flagman directing one-lane traffic through Afton all day while Route 66 is being resurfaced. It was kind of a mess, and it certainly didn't help travelers who wanted to visit Afton Station. We felt sorry for the flagman, who had been there for many hours and told us he sometimes works 15 hours a day. We realize he's lucky to have a job in this economy, and yet with all these 100+ degree days lately, it can't be fun. He came in to use the bathroom and we gave him a very welcome bottle of cold water.
It was an odd day at Afton Station. Ron M. and Tattoo Man were both with me today. We had early visitors from Ponca City OK, Jefferson City TN, and Boaz AL. In the late morning, a couple from Springfield, IL dropped in on their way to the Checker Car Club convention in Los Angeles. We appreciated their rig -- a very cool vintage Checker pulling a teeny tiny teardrop trailer which, they said, is incredibly comfy for sleeping. This couple was very well-versed on Route 66 and very enthusiastic tourists. 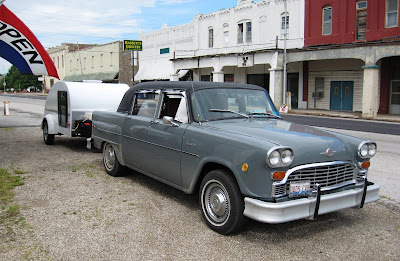 Some folks from the Mental Health Clinic behind Afton Station came in looking for a patient who had wandered away. There were about 5 very concerned people scouring every nook and cranny of the town before they found the guy about an hour later. Just a little excitement for sleepy Afton.
A very agitated local friend came in, upset because he couldn't get the $100 worth of minutes he'd just bought to show up on his cell phone. It took both Ron and me, working with the woman at the phone help center, to make it happen. It was ridiculously complicated and we agreed that our neighbor had every reason to be upset. Add to that the fact that his roommate died last week, the daughter of his best friend was killed in a car accident, and he'd just had his car repossessed. Sometimes I feel so lucky comparing my life to what hell others are going through.
A very charming young couple from Hanover, Germany visited in the afternoon. Then one of my Facebook Friend arrived -- Rick Zimmer from Portland, OR who is doing all of Route 66 on his Harley. Oh my, what a wonderful guy! He's done a lot of study for this trip, and his enthusiasm is contageous. Just one more bit of proof that Route 66 people are THE BEST! Wish he could have stayed longer, but we had a good 90 minutes of visiting with him, then he headed for the Afton Route 66 Motel down near Buffalo Ranch to spend the night. I'm so glad to have made the acquaintance of this charming gentleman. 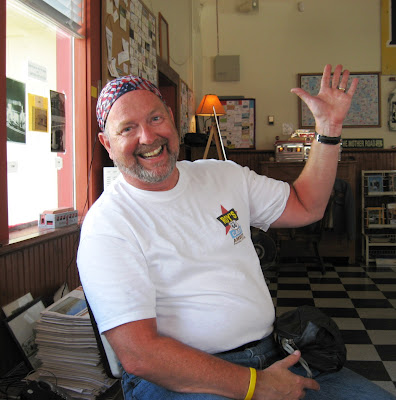 Reading your blog has me chomping at the bit for a road trip back to Oklahoma and Missouri.
As a side note Checker ceased production of cars in 1982 but was still in operation until July of this year. They have been producing components and sub assemblies for GM built vehicles.

Hello, I stumbled onto your Blog and scrolled and scrolled knowing that in one of your photos there just HAS to be a Teardrop camper. Considering the whole Route 66 theme. Yuppers there it is!! I'm happy now!! :o)