It was a marvelous mix of visitors at Afton Station today, but surely the most uniquely-named was a dog named.... Chicken! Yes, really. Here he is, and he was a cutie! The pet of a family of three from Norman, OK was so named because when he was a pup he was afraid of just about everything. That's not true any more, but the name stuck. 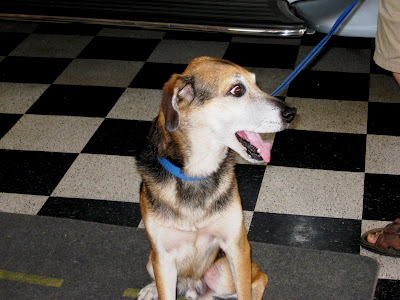 Birthday Boy Ron M. rode with me to Afton today, and Tattoo Man was already there when we arrived. The morning was a little slow, but we used the time by pondering important questions such as who said "Sufferin' Succotash" in the old comics. (We later recalled that it was Daffy Duck, but I just looked it up on Wikipedia I found we were wrong. It was Sylvester the Cat.) But I digress....

A gentleman from Afton came in with his grandson from Houston, TX. The older man, who has visited before, told me he has some old pictures of Afton he'll let me copy for our history slide show. We also had several avid Route 66 fans visit. James Dawson from Bentonville AR and the Nagel family from Des Moines, IA were all on seriously-researched Route 66 trips. Having studied the Route for years, they were sure they could complete their trips without missing any of the significant sights. Oh, how I wish others would take a page from their book!

Could it be? Are those people on the Afton water tower? Yes! Looks like they're up there prepping for a new paint job. So that's what they're doing with the $12 Occupancy Tax they collected from Afton Station this year! :-) 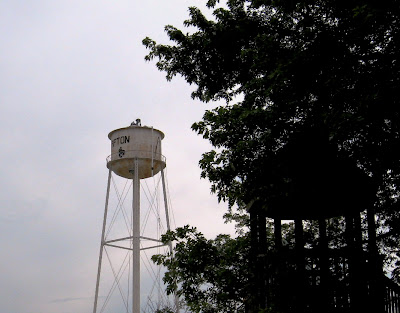 Friend Brad Nickson tells me that the wonderful old neon sign at the El Rancho Grande Restaurante on Route 66 in Tulsa is in the process of being restored. I'll furnish a photo tomorrow, or even better, I'll post Brad's excellent picture as soon as I get his permission. Great news for Tulsa Route 66!
Posted by Laurel at 6:34 PM

Wow, Laurel, you're really getting tricky. On Thursday you had a photo of the Coleman with a Friday night concert by "Trout Fishing in America" shown on the marquee. The first line of one of their popular songs is "I got a cat named Chicken Joe" and today you are visited by a dog named Chicken. Coincidence or conspiracy?

The complete lyrics are here:
http://www.mp3lyrics.org/t/trout-fishing-in-america/chicken-joe/

Yay! Our Chicken dog made your blog title today! We just got home from our trip a few hours ago and after looking through my pictures we had to stop by and visit your blog. We loved stopping into your station last Saturday, it was one of our favorite stops along Rt 66. I'll be posting pics on my blog soon of our trip. Added you to my follow list, will be checking in often!
Take care!