Oh, what a beautiful morning! 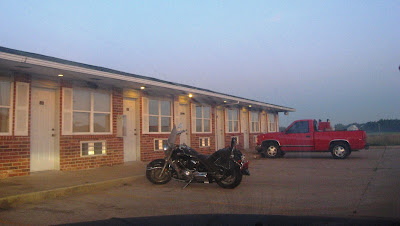 Call me weird, but there's nothing like waking up in a motel on a cool midsummer morning, when the low-slung fog blankets the surrounding fields and the sun is rising like a gigantic flaming ball in the east. I am energized! Now I'm sitting in Mom's, a cafe in Miami that's brand new to me. The chance to try a new diner adds to my enthusiasm. I think I'm the only one here who isn't sporting a John Deere cap (or a close fascimile).

This is a mini-vacation for me. Eating in this new place is a two-part experience. Atmosphere is No. 1, and Mom's gets an A from me for that. The food, on the other hand, gets a B-. My breakfast just arrived. The omelet is big and decent, but the bacon is somewhat flavorless, and both the grits and toast are swimming in melted margarine. But never mind that. I'm just glad to be here. The temperature was only 65 when I left the motel this morning. It's only 6:30 now, I'm only 15 minutes away from Afton Station, and I don't have to be there until 9:30. I have three hours to roam! 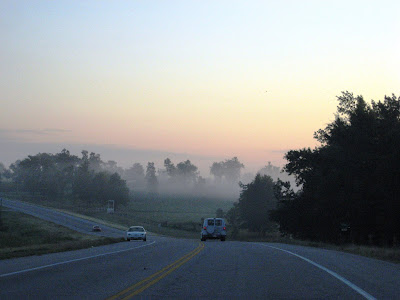 The motel last night was just fine. No mistake about it, it was definitely of the mom 'n pop variety, but very clean and lacking nothing (except perhaps a decent sized bar of soap). They do have "theme rooms", but I didn't ask for one. I managed to sleep like a baby without, surprisingly, any nightmares involving being devoured by gigantic purple roses. The photos of the room will explain. But hey, nobody ever said that motel owners have to be interior designers! 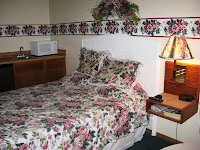 Last night was great. I met up with old friends Nancy and John Howard from South Carolina at David's house, and after cocktails we all headed for dinner at a local Grove restaurant where I had the greatest catfish EVER (although way more than we could eat). It was nice to catch up with John and Nancy, whom we've known for about 30 years. They'll be driving over to Afton Station later to check out the Station.

After breakfast, I drove east on Route 66 to Miami, Commerce, and Cardin. There wasn't much new to photograph other than one of the new Route 66 stencils on the roads of Commerce (coming soon to Afton too, if I can swing it), the Dairy King building in Commerce, and the beautiful Coleman Theater in Miami. 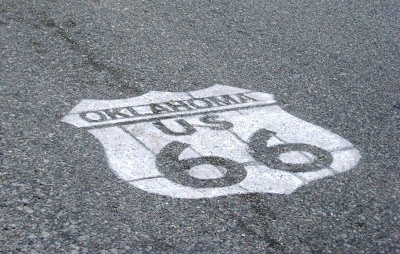 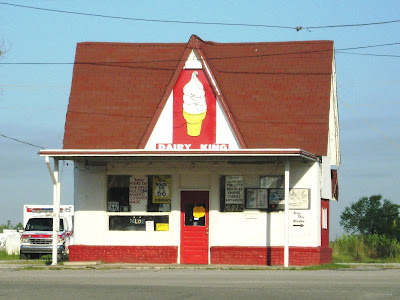 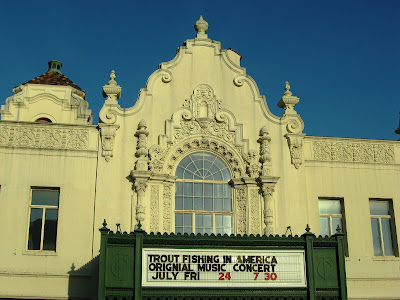 And so.... finally it was time to drive back to Afton and open the Station. My first visitor was a man from St. Paul MN who came to see the town where his father was born in 1918. Since it was obvious that Afton is nothing like it was almost 100 years ago, I produced some of the postcard images I've collected of the town at the turn of the century. He was thrilled, and I promised to send him scans of all the images I own.

Nancy and John arrived with David shortly after that. I think they enjoyed finally seeing Afton Station, since Nancy is a regular blog reader. It was so great to spend some more time with them, and wish their visit could be longer. I'm upset, however, that David rushed them out so quickly that I didn't get to take a picture of them. There were 16 other guests today, from Dexter MI, Fairland, Grove, Tulsa, and Claremore OK, and Paso Robles, CA. I was especially excited about a visit from four high school seniors from Tulsa who decided to spend a day of their summer vacation exploring Route 66. I told them to tell all their friends to give it a try, too! Wouldn't it be wonderful if traveling 66 became a high school fad!
Posted by Laurel at 5:17 PM

Didn't, ahem, a friend of yours say he'd help painting some Route 66 stencils in and around Afton Station? They would great on the new black asphalt! :-)

Glad to see you weren't "disturbed" in the shower, like Janet Leigh was.

I like your morning picture. Riding my motorcycle to work early in the morning is always enjoyable. My wife didn't understand why I like to wake up so early in the morning to go deer hunting in the fall, until she started walking our son down to catch the school bus. Then she found out just how enjoyable it is to watch the world wake up.

In Kansas, I parked my Sportster in front of one of those Route 66 shields painted on the road and took it's picture. It's one of my favorite ones.

The seniors weren't Webster kids, were they?

No, they were from Booker T.