It isn't quite the Fourth, but almost. Today, the Third of July is the day-off holiday, since the Fourth is on a Saturday. The streets of Tulsa are quiet. I'm cooking a rack of ribs, because Ron M. is coming for a picnic dinner. As is usual on Friday, I couldn't go to Afton. I'm sorry about that, because I have the feeling that it would have been a good day for visitors at the Station.

A few days ago, on my way to Afton, I took a detour of a couple of blocks in Claremore to take a few pictures of the Will Rogers Memorial and Museum. Will was one of Route 66's most famous and revered citizens, and in fact Route 66 in Oklahoma is called The Will Rogers Highway. The museum was closed because it was very early morning, but here's the exterior. It's quite a lovely place. 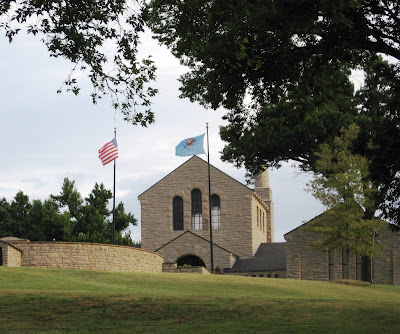 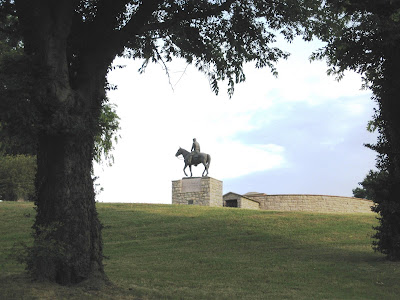 Coincidentally (I didn't find this out until just now, after posting these pictures), the Fourth of July was an important milestone in the life of Will Rogers. In 1899 Will, as a teen-ager, entered a Fourth of July rodeo in Claremore that had a big impact on his future life. The rest is history. Here's the story, in his own words:

“Well all I know is just what I read in the papers, and what I run into here and there. “Fourth of July sneaked up on me before I had even a firecracker or knew the day was anywhere near me. “I was around the old home place at Claremore and they said the next day was a big ‘Rodeo’ up at Nowata. Well that's right near. I knew they would be having a lot of ‘Calf Missings’ at various towns on the Fourth, so I was glad to get to this one, for there I met a lot of old boys that I had been raised with. Some of 'em still roping. “Lot of these places are having what they call old timers roping contest. Now that's getting right up my alley. I am going to start practicing and see if I can't get in some of them. “I was just thinking when I was looking at that show the Fourth, it was at a little Fourth of July celebration at Claremore just 35 miles from this one, on July Fourth, 1899, (Boy that's 33 years ago) they had a steer roping, and I went into it. It was the first one I ever was in; the very first thing I ever did in the way of appearing before an audience in my life. Just such a show as I was looking at now, (only ours was not so skilled, all these things have advanced). “Well, as I look back on it now I know that that had quite an influence in my little career, for I kinder got to running around to 'em, and the first thing I knew I was just plum ‘Honery’ and fit for nothing but show business. Once you are a showman you are plum ruined for manual labor again. “I had an awful good little horse that really put me in the business. A little Dun (yellow pony, called ‘Comanche’). All the old timers will remember him. He put you up so close to a steer that you didn't rope him, you just reached over and put a ‘Hackimore’ on him.”

Writer T. Lester adds: That’s the way Will Rogers characterized his entrance into show business. In his modesty, Will failed to mention the most important aspect of that story: That he won that steer-roping competition. The prize money Will received for first place was 18 dollars and 10 cents. While the amount of $18.10 was not inconsiderable in 1899, it was the fact of winning first prize that would prompt young Will to build on that initial success. From that point on, he entered most rodeos in the area. It is hard to say whether it was the excitement of the competition that was the attraction, or whether it was simply Will’s passion for travel, to be on the move, to learn what others were doing, or simply to see for himself what lay beyond the horizon. Most likely it was all of these, for as the rest of his life would clearly demonstrate, it was simply impossible for Will Rogers to live life as a mere spectator, standing uninvolved along the sidelines. One thing is certain, the prize money never was an enticement. He was a rich man’s son, and money meant little to him. It was a case, as Will admitted freely, that show business had bitten him and he was infected for life. Over the next few years, Will Rogers left the family ranching business near Oologah to go in search of the next rodeo, the next audience. He joined Texas Jack’s Wild West Show in South Africa and began earning a regular paycheck, as much as $20 a week. Before long, he was an international celebrity. He conquered every medium of his day, earning star status on Broadway and in the movies, in journalism and in radio. And it all started with a little rodeo on the Fourth of July in Claremore, Indian Territory.

I hope your ribs turn out as good as Ken's did the other day. Yum, they were good! Enjoy the holiday weekend!

The ribs were EXCELLENT as were the fresh beets and the green beans!