I wondered how the old Admiral Twin Drive-In would look at dawn, so I took the alternate Admiral Place alignment of Route 66 out of Tulsa this morning. The drive-in is still operating and showing first run movies on both of the back-to-back screens (on the big structure you see to the left). It's still popular, thank goodness, because at the rate that other U.S. drive-ins are dying out, it's great to know that Tulsa still has one , alive and kicking, on Route 66. The Route 66 Drive-In in Carthage, MO is also doing well. In fact, today some visitors to Afton Station told me that they couldn't get in last night because the line to enter was too long. Great news! 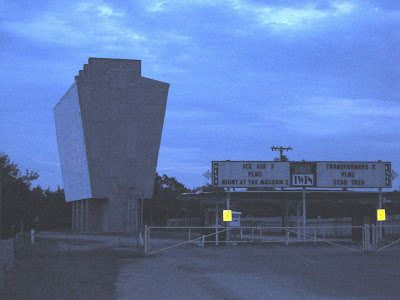 Since I arrived at Afton Station about 45 minutes early this morning, I had time to go through my Guest Book and do something I always enjoy -- counting up the states and countries represented by those who have come to visit. This morning, I did the Guest Book from Jan. 1 to June 30th of this year -- just the first six months. Guests visited from 41 states and 16 countries!!! Not bad for half a year, when a good bit of that time was in the dead of winter! I won't list the states represented. I'll just say this: If you're from the states of Delaware, Utah, Montana, Maine, N. Hampshire, Rhode Island, or Nevada, you'd better get yourselves over to Afton Station so that by the end of the year I'll have a full 50 represented! (The kid from Hawaii came after June 30, so I can't count him this time).
Foreign visitors have come from Belgium, Canada, France, Norway, Germany, England, Netherlands, Brazil, Spain, Italy, Japan, Australia, Switzerland, Zimbabwe, India, and New Zealand. It's a regular United Nations!
Now, for today..... 23 travelers dropped in. I was particularly fond of this guy before even talking to him, since I'm a huge NY Yankees fan. He and his stepson are doing a full Route 66 trip. Good for them.... and GO YANKEES! (Their trip blog is at http://www.tripdown66.blogspot.com/). 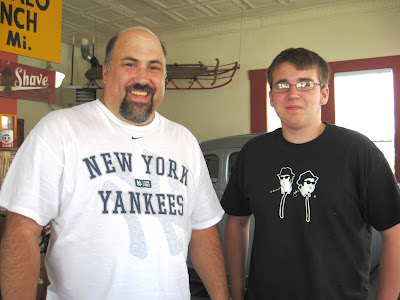 Sean and Mason from New York

Other visitors were from Tulsa, Chelsea, Edmond, Enid, and Glenpool OK, Walnut Grove MO, and Pamplona, Spain. I discussed the Running of the Bulls with one of the Spanish guys, since it's happening in their town as we speak. You probably already know that a young man was killed by one of the bulls this year, the first time since 1995. The young visitor to Afton Station assured me that, being of sound mind, he would never even consider entering into that foolishness. Good for him!
I was alone today at Afton Station, but it worked out just fine because the visitors came in sequentially instead of all at once. I was able to visit with most of them for enough time to hear their trip stories, give advice if they needed it, and still take a breather every now and then.
See you tomorrow!
Posted by Laurel at 4:37 PM

Double Drive In, that is very cool.

Laurel, Thank you for the spotlight in your blog, and your kind comments on ours. It was a pleasure seeing your establishment and talking with you for a few minutes.

I think the UN should set up a satellite office at Afton. :)

We still have an operating drive-in about 20 miles away, the Tri-Way. It does fantastic business!

My word verification is 'ornerrri.' Haha! That's me...ornery with a little extra oomph.