Kind of a ho-hum day 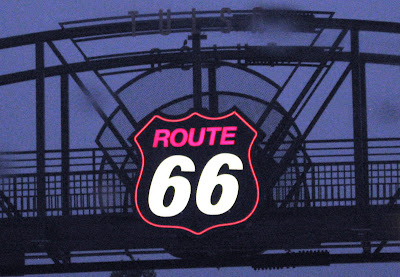 It's a good thing I took this picture this morning on my way to pick up Ron M. before heading to Afton, because otherwise I wouldn't have anything to illustrate this otherwise ho-hum day. In fact, for most of the morning it seemed as if we were being boycotted by the traveling public. Early visitors were a couple from Phoenix, after which we had several hours of nothing... nothing! Where were all the people? Nobody traveling at all today? Was it something we said?

Finally, after lunch, the visitors started to arrive. Even so, we only had a total of 11 guests all day, which is really LOW for this time of year. Our out-of-state visitors were a Willie Nelson look-alike from Brooksville, FL on a hot motorcycle airbrushed all over with lightning bolts (to commemorate his home state, which is considered the Lightning Capital of the U.S.A.), and a couple from Wichita, KS traveling Route 66 on their honeymoon. Locals came from Langley and Sand Springs, OK. We were also visited by a couple of young gals from Afton.

To end the day, Lauretta Armagost Williams came in. Lauretta just had a book published and had heard that I wanted a copy. Her book (quite large and nicely researched) is a history of the tiny town of Narcissa, OK which is on Route 66 just about 10 miles from Afton (between Afton and Miami.) Since Narcissa is a baby step away from being a ghost town -- perhaps even more so than Afton -- I had been anticipating the publishing of this book, and I plan to start reading it right away. Among other things, I find it interesting that the 'a' at the end of Narcissa is not pronounced. I asked Lauretta why, and she had no answer to that mystery. The town was named after a girl named Nessa, which makes the whole thing even more strange. (If anyone is interested in attending Lauretta's book signing, it's being held at the Dobson Center in Miami, OK this Sunday from 2 - 4.)

So, that was our day. I trust that the low visitor count was just a fluke and won't continue into the weekend.
Posted by Laurel at 5:18 PM

Love the picture! I'd be willing to bet things will pick up through the weekend. I predict that today was a fluke.