There was certainly no common denominator ruling today's pace at Afton Station or the guests who came to visit. It wasn't necessarily a busy day, but there was plenty to keep me well occupied. On the way to Afton this morning at slightly prior to the crack of dawn, I decided to take a couple of pictures of motels at night for a new friend from Australia who shares an interest in motels, particularly when photographed in the dark. There aren't that many to choose from on my regular route, but here are two. These are for you, John. 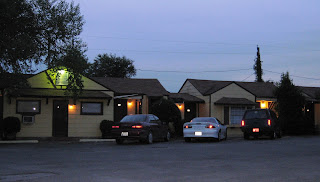 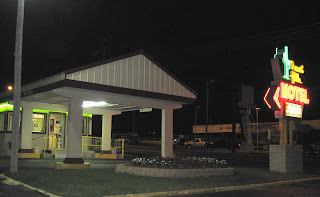 Still early after the aforementioned photo shoot and a quick breakfast at Clanton's, I decided to drive right past Afton Station and take a short ride on the Miami segment of the 9-foot alignment. I haven't been there for a while, and Betty had told me about an intriguing cemetery on that stretch that I'd never noticed before. Well, I couldn't find it (probably didn't drive far enough), but I took a quick picture of one part of the road that particularly imparts a sense of primitive isolation. Always remember... this was once the MAIN STREET ACROSS AMERICA, all 9 feet of it! 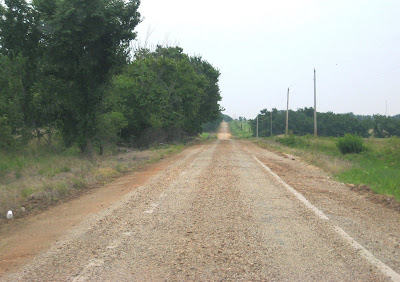 I had barely unlocked the door of Afton Station and turned on the air conditioner in defense against the predicted 100 - 105 temperatures, when I had my first visitor. Jim is a nice guy from Grove, OK who's a recent transplant from the East Coast (suburb of NYC) like me, so we had quite a lengthy discussion comparing restaurants of Eastern Oklahoma with restaurants of NYC. I guess it wasn't really a fair comparison, but Jim did tell me about a great place he's discovered just across the border into Missouri. I must try it some day.

A motorcycle rider from Sacramento, CA stopped by on his way back to California after crossing the country west-to-east on Rt. 50 and now cruising Rt. 66 on his way home. That's a long trip on a bike for sure! A family from Oklahoma City also visited, accompanied by their grandparents from Albuquerque, NM. Other visitors included a man from Chanute, KS and two very hot and tired motorcyclists from Vancouver Island, Canada where they're simply not used to this scalding heat.

Betty visited with me for several hours in the afternoon. She also brought me some of that amazing Amish butter. Thank you SO much, Betty!
At the end of the day I had a visit from Jordan Nelson, a reporter from Public Radio Station KOSU in Stillwater, OK. He's doing documentary spot about the people of Route 66 and had called in advance to ask if he could interview me. He's a very nice man who is both a student and an employee of the station, and I really liked his interview style. I didn't feel as nervous as I usually do during interviews, but perhaps that's because there was no camera involved. After all, I've always felt that I have a face that's made for radio! Here's Jordan. 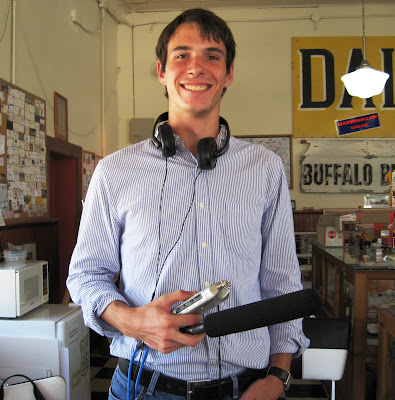 When the inteview gets published and is on your local NPR website, please make sure you post a link :o)

I love the pictures...the soft glow of those outside motel lights brings back memories. The photo of the old road is also wonderful, and one of the most amazing things about Route 66, at least to me, is that this narrow, twisty road (not in all places, but in many) was THE main road west for so many years. For those who have only traveled 2+ lane highways, it must be almost incomprehensible.

I like Highway 50, the Lonliest Highway, too. I would love to travel it, someday.

For those Canadian motorcyclists, one trick is to soak your clothes down with water. Some people will even wear a sweater that's been soaked, then put a demin jacket on over it.

Congratulations on your interview. Of course, I think it would have been better if Rush Limbaugh or Sean Hannity had interviewed you. But, then, I'm a mean, evil, loathsome, puppy dog torturing, Christian, Conservative Republican, too :)

Beth -- I can't wait to show you my piece of Route 66. I hope you'll allow me to be your guide when you're here next year.

Trevor - I don't think you're evil, mean, and loathesome. I can't say the same for Limbaugh and Hannity, however. :-)

Hi Laurel and thank you for the lovely photos. I think Motels always look very pretty at night.Best wishes from Melbourne,Oz,John