I think I've found the flaw in this blog writing thing. On the days I have the most to say, I'm almost too tired to say it, because all the things I want talk about are the things that made me too tired. It's a vicious circle. Today is one such day. But, I plod on.... 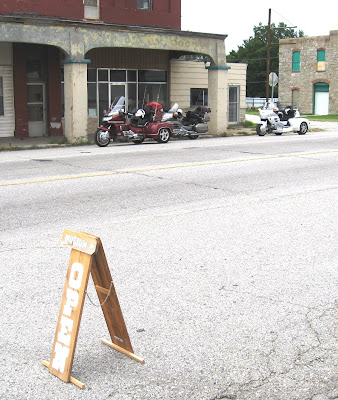 The city of Tulsa is chock full of Gold Wings. They're beautiful, luxurious motorcycles, and there are 8,000-10,000 in town for their "Wing Ding", according to tonight's news. They're everywhere! However, only a few made their way up to Afton today. You can see a few of them above. I believe they were all from Decatur, IL, but I'm not sure I made the right notation on that.

We may not have had a huge number of Gold Wing visitors, but it felt like just about everyone else in the world showed up at Afton Station today. Since I'm exhausted from talking ... and the long drive home ... and the heat ... I'll just give the daily rundown without much commentary. One thing I must point out, however, is that I'm excited that the foreign visitors have begun to arrive in larger numbers.

Ron M. was with me, and he managed to take this very cool photo which I believe is a wonderful intro to the Fourth of July weekend. I particularly love his reflection as the snaps the picture. 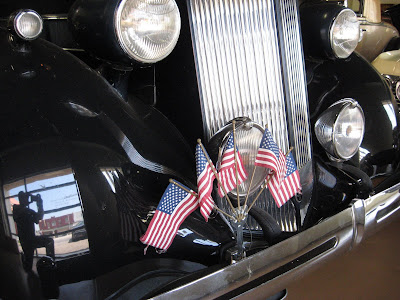 We will not be open tomorrow (Friday) but will be at the Station to meet and greet visitors on both Saturday and Sunday. Come see us!!!!

Hope you have a great day off tomorrow, and lots of visitors on S&S :o)

Yes, get some rest tomorrow! What a crazy, busy, and fun day, but I can imagine how exhausting it was! Have a great weekend!