No, don't! I love the insanity! Keep it coming! 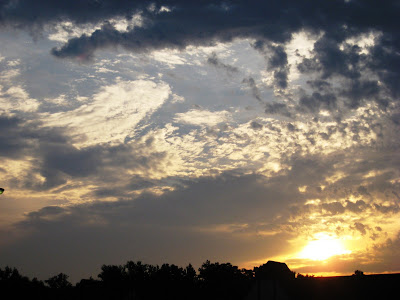 And sure enough, when we were about halfway there, the skies opened up and the rain descended in buckets. We were feeling sorry for the 8,000+ Gold Wing riders amassed in Tulsa today, plus all the little towns (and big towns) which had fireworks planned for tonight, and all the families who were anticipating picnics, barbecues, and other outdoor activities on this Independence Day. On the other hand, we need the rain and my lawn is thrilled with the moisture.
Ron M. was with me today. Our first visitors were, not surprisingly, a group of soaking wet motorcycle folks (not Gold Wing) returning from a car show and concert on the lake. They took refuge in Afton Station until the rain backed off a little, and then they were off to their homes in Joplin, MO. Not long after they left, the rain let up, the sun came out, and a cool breeze made it possible for us to sit outside and enjoy the apres-rain atmosphere.

Here's one of the drenched bikers. His "mask", which was keeping is face dry, is the scariest thing I've seen since Halloween. I told him not to forget to take that thing off before going into his bank! 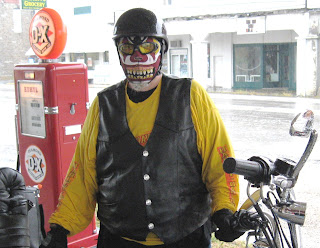 Since Ron and I admit to being part of the insanity, and since it was a holiday, we got out the Uncle Sam hat and the megaphone and made fools of ourselves by gesturing and shouting to passing cars. (I am not as grumpy as the picture below would have you believe. Ron just caught me squinting into the sun!) Anyway, it was fun, and we had 30 visitors, so I guess we didn't scare too many people off. 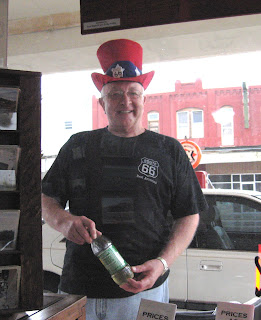 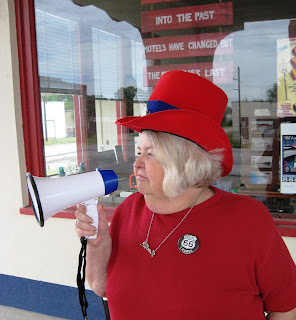 Among our visitors were some friends from Tulsa. Julie Miner and her friend John dropped in unexpectedly. They're at Julie's lake house this weekend, and she wanted to show her friend John the Station. Then, two other friends from Tulsa, Jim and Joe, arrived. We were expecting them. They drove up to spend part of the day with us, and we were glad the rain hadn't made them change their mind. 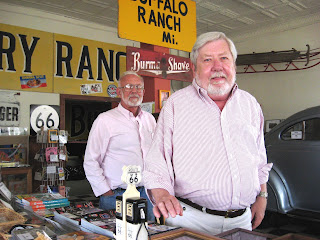 Other visitors came from Nowata OK, Sulphur Springs AR, Broken Arrow OK, Jennings OK, Pittsburgh PA, Hollister IL, Spring Grove IL, Oklahoma City OK, Bartlesville OK, and Stillwater, OK. I think the fact that it was a holiday (and the early rain) kept our visitor numbers down a bit today.
I got back to Tulsa just in time to walk down to the end of my street (just 3 houses down) to take pictures of the parade of Gold Wing motorcycles, wending their way from the Fairgrounds where the convention was headquartered to the the bank of the river, where the fireworks will be held tonight. As you can imagine, the parade was LONG.... about 3 or 4 miles long, in my estimation. Obviously, no photo could do it justice, but here's one. It took about a half hour for all the bikes to pass my street...lots of horn honking and flag waving. Nice!

And now, this evening I will be able to watch the Tulsa fireworks (which weren't cancelled!) from my front porch, although they become less and less visible as the trees across the street grow each year. Even so, I love living downtown for just these reasons. Happy Fourth to all!

Looks like you managed to have a fun day :o)

I'm glad the skies cleared and you had a good day!