Care for some WHINE?

I'll get over the whining quickly, I promise. It's just that a perfectly lovely day was kind of ruined during my last 20 minutes at Afton Station, when a large group of Norwegian motorcycles pulled up in front of the Station. Excitedly, I motioned them to come in. Some had already started to get off their bikes, but before I could get around the counter and to the door, the leader motioned them to go forward, and they roared away. What the heck???? Was my gesture misinterpreted? Did they just not like the looks of the place? Yes, I know that every group can't possibly stop at every place, but it still hurts my feelings every single time. I guess I'm just thin-skinned. I saw their Harleys parked at the winery on the way home. Maybe they were just eager to get to the libation. Ok, I vented and I'm over it now. Sorry. :-)
At any rate, on this day when I'm admittedly feeling a bit Norse-phobic, I have to say that my first visitors were just about the three nicest Norwegians you could ever imagine. This gentleman (and I do mean gentleman) from Vanse, Norway and his two college-age granddaughters brightened my morning. Grandpa is taking the girls on a full Chicago-to-LA vacation, and all were enjoying it immensely. When they left, I asked if I could take their picture for the blog, and the grandpa said "Just tell your readers that we're a trio of crazy Vikings!" They're not crazy, just charming. 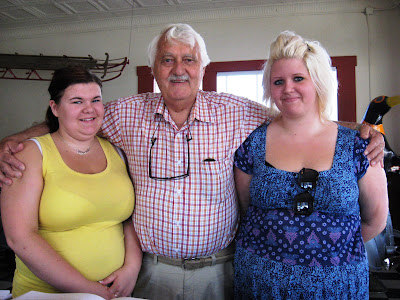 Betty came to brighten my day, and we had an hour or so to chat before more folks started coming in the door. Two couples in very sharp late-model Corvettes cruised in, coming from Overland Park, KS and heading west. Folks from Grove OK, and Granby MO stopped in. David (my ex), his wife Sylvie and son Patrick stopped by, too.

Then.... at long last.... I had a visitor from Hawaii!!! I've been waiting for two years for this, and now I have signatures in my guest book from every state! This Hawaiian visitor happened to be a young boy (probably about 10) from the small city of Hivi, who was traveling with his father who lives in Tulsa.

In the afternoon, a big Land Rover rolled in. It was covered with decals from so many different countries that Betty and I couldn't guess their origin until they introduced themselves. My guess was Italy and Betty guessed Australia. As it turned out, we were both wrong. Akis and Vula were a pair of Greek photographers and documentarians who have been traveling every continent for the last 2 1/2 years, making a documentary called "The World OffRoad". The story of their travels is long and quite amazing. They asked if they could interview me (of course!), and that was when David appeared, so they interviewed him, too. They tell me that they update their video blog every evening at http://www.theworldoffroad.com/, so check it out later. I'll be doing the same.

Here are Vula and Akis (facing camera) talking to David and Sylvie. 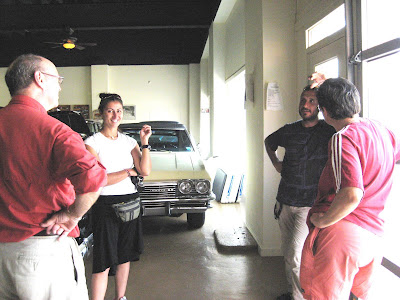 And this is their impressive logo. 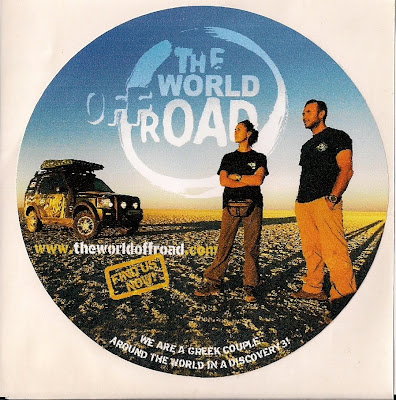 Traveling all over the world in a Land Rover! Driving trails! Sounds like fun.

Do they know there's a jeep trail on Cavenaugh Hill near Poteau? That's supposed to be the worlds tallest hill, lacking only a couple of inches of being 2,000 feet tall and, thus, being a mountain. That would be a fun climb in their 'Rover.

I'm glad your Norse-phobia was short-lived. Sounds like a lot of interesting visitors!