An Arrow and a Jackalope

Today, Ron and I took a little jaunt to a couple of places in Tulsa I've been wanting to explore. They're not actually on Route 66, but they ARE in Tulsa, and since Tulsa is on Route 66, I'm sure I'll be forgiven for talking about them here. Won't I?

The other day the Tulsa World had a story about a project undertaken by the Reservoir Hill Neighborhood Association that really caught my attention. Reservoir Hill is .... well... a hill with a (former) reservoir on the top! It's in North Tulsa and is quite an interesting location, a once-elegant neighborhood that took a slide downward and is now seeing the beginnings of an upswing. Homes on Reservoir Hill have some of the best views in the whole city, and many of the houses are quite impressive, but I've always felt a sort of detachment from the rest of the city, which is hard to explain, when I'm there. Recently, the Reservoir Hill Neighborhood Assoc. took on the project of recreating a giant arrow and the word TULSA on the hill next to the reservoir.
The original sign was created in 1927 to greet aviator Charles Lindbergh when he came to Tulsa (after his famed nonstop Atlantic crossing) as part of a national tour and to promote the Tulsa State Fair. The huge white arrow pointed to what was then the city's largest private airstrip, where Lindbergh planned to land. When the citizens of Reservoir Hill decided to recreate the sign, they needed 140 tons of white crushed marble, and they also chose to reorient the arrow so that it now points toward the current Tulsa International Airport. Six residents of Reservoir Hill did all the labor. Although the sign is to be dedicated on July 18th, we wanted to see it today.
The road to the former reservoir is closed off, so we couldn't get above the sign to get a good picture, but at least this proves we were there, and you can see the general size of the huge arrow.

These are the two pictures from the Tulsa World -- before and after. As you can see, the sign had to be moved out of the actual reservoir area to the hill beside it. 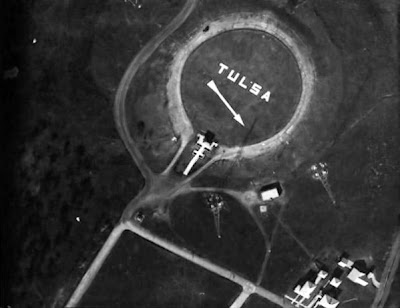 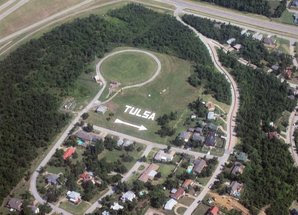 The arrow today.
____________________________
Our second stop was at a new little neighborhood grocery market which I'd recently heard about. You can have your WalMarts and Sam's Clubs. There's almost nothing I love more than local entrepreneurship. This little grocery the Blue Jackalope, was opened several months ago by a very cool guy named Scott, and it has everything you'd expect from a corner store, and then some. Shelves hold a supply of canned goods, but basically just one brand of each thing, thus cutting down the selection time. Breads are fresh and many are organic. Meat is local, and so is produce. In fact, some of the produce comes from the community garden across the street, in which owner Scott had a hand in establishing. They also serve sandwiches, and Ron and I split a delicious avacado, hummus and muenster on wheat bread, which we ate in one of the little seating areas. It made me happy to know that this place exists, and it's not that far from where I live! 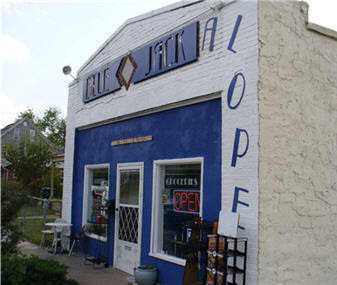 Back to Afton for the weekend!
Posted by Laurel at 3:01 PM

Since Tulsa is one of the main cities on Route 66, I think anything cool in Tulsa is fair game! The Blue Jackalope sounds like a great place, and I hope it does well!

I stumbled across this while digging deep on Google for Reservoir Hill mentions. I just wanted to let you know there is nothing "former" about the reservoir here. I live a couple of houses downhill from it, and it's still in use today :-)

Thanks, Anonymous! I appreciate the info. I hate to misinform my readers. Lucky you, to live on Reservoir Hill. Love that neighborhood1