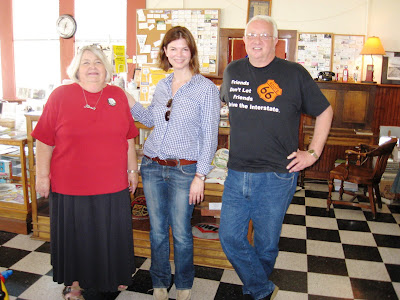 I sat at Afton Station this morning jotting down some random thoughts to use on the blog, just in case it was a deadly dull day with not many visitors. Well, you can forget about that! This was one of the most interesting days yet! For one thing, when I got to the Station, I read the note left by the crew who took over for me when Ron M. and I left to go to the Volvo thing yesterday. The daily total of visitors was 96!!! That sets a new record for one day, and I couldn't be happier!
Just about the time the a/c kicked in and started chasing the humid muck out of the air, a parade of very nifty hot rods slowed and stopped in front of the Station. Fifteen people emerged, representatives from two separate car clubs -- Lake Country Car Club of Atoka, OK and the Fun Bunch from Sapulpa, OK. They were returning to their homes from a weekend trip to Lake of the Ozarks, and found Afton Station by chance. Great people driving some sharp pieces of iron. Here are two of them.... 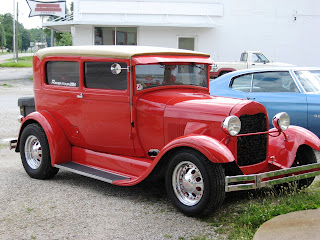 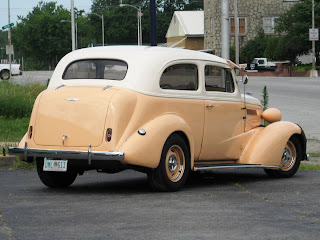 They left, and shortly thereafter a family from Eagan, MN came for a visit. Ron M. arrived too, as he decided to drive up in his own car today. Betty came a bit later, too.

And then..... and THEN, Afton Station's very first visit from a bona fide movie star! Jeanne Tripplehorn, the actress, and her cute 7-year-old son August are traveling the full extent of Route 66, for their own enjoyment as well as to do some public relations for the World Monuments Fund (http://www.wmf.org/). In 2008, Route 66 was named one of the 100 Most Endangered Historic Sites in the world by the Fund.
Jeanne is the star of the HBO series "Big Love", which happens to an absolute favorite of both Ron and me. She also portrayed Jackie Onasis in the recent production of "Grey Gardens", and those are just two of the more recent roles in her long list of accomplishments. ( http://www.imdb.com/name/nm0000675/ ) She and her son were gracious and interesting guests, and Jeanne showed great interest in the Station and our lives. There's not a speck of "Hollywood" about her! 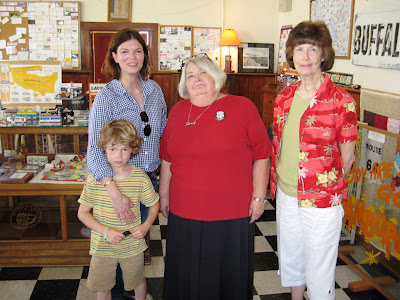 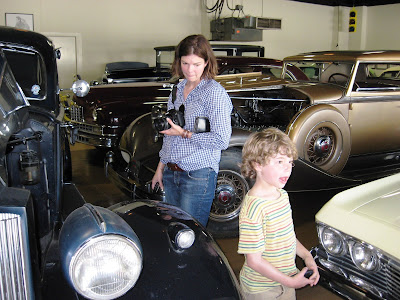 Jeanne and August admire the cars

When they got ready to leave after about a half hour, Jeanne realized that August had locked her keys in her rental car, so (lucky for us but not so lucky for her), they were forced to stay for another half hour while we waited for the AAA to come and rescue her. We chatted and took photos until the truck arrived. And honestly, we didn't bribe August to lock up her keys so they'd have to stay longer. Well, at least she won't forget US at the end of her Chicago-to-L.A. odyssey! 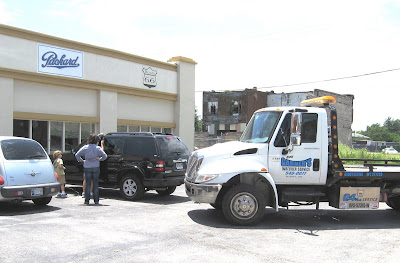 Rescue arrives, in the form of a wizzardly locksmith from the AAA.

Dean Walker from Kansas stopped in shortly after Jeanne left. Dean is a colorful character, always full of interesting Route 66 gossip. He's known as "Crazy Legs" Walker, for his ability to turn his feet around totally backwards. He was even featured on Jay Leno for his abilities. Final guests were Bobby and Linda Allen from Allen's Fillin' Station up the road in Commerce. It's another restored gas station in the town in which Mickey Mantle grew up. The Allens were coming home from attending the Oklahoma Route 66 festivities in Chandler last night.
An interesting day, start to finish!
Posted by Laurel at 5:35 PM

Wow, that's so cool! And how nice to hear that she was a kind and decent person! So often, that's not the case. What a red letter day for Afton!

Mrs. Tripplehorne is a Tulsa native. She was also in "Basic Instinct", "Waterworld", and many other movies.

Besides that, she's drop-dead gorgeous!

She sure is gorgeous! I've been following her career for a while.

Mrs. Tripplehorn and her son seemed very nice when I saw them at Shea's in Springfield IL. They were just finished with their tour and posed with Bill Sr. while Bill Jr took their picture. I happened to drop in and see if they had the new issue of The Pulse.