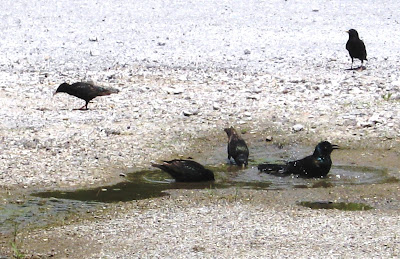 Today was one for the birds. Well, not all of it. But, any stretch of time at Afton Station that's as painfully slow as our morning turned out to be is definitely for the birds. We were so bored that Ron M. and I decided to take our chairs outside to watched the trucks go by -- that is, until we noticed a small flock of starlings bathing in a mud puddle just to the side of our driveway. Staring at them kept us occupied for at least an hour. Yes, that's how bored we were. On the way to Afton, we had stopped at QuikTrip and decided to try an order of their new "Roasted Potato Bites". They were so bad that we attempted to feed them to the birds, but apparently they don't appeal to starlings either. The little yellow blobs you'll see in the foreground of this picture are the potatoes, which are being summarily rejected. 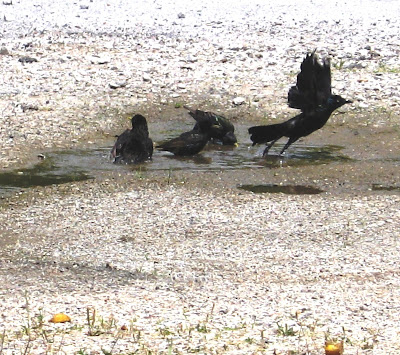 A robin joined the starling bath for a while. 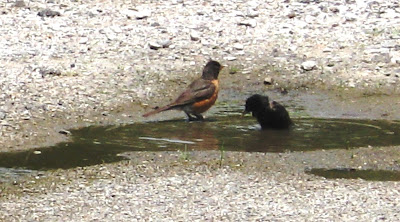 Ron speculated that the birds may have been summoned by the ephemeral raven that lives on the curtain across the street at the Bates Motel. His existence having been revealed in Ron's photo, perhaps he called in his reserve troops to prove strength in numbers.
Thankfully, the afternoon improved considerably and we closed the day having greeted 21 visitors, from Farmington NM, Denton TX, Kansas City KS, Broken Arrow OK, Atlanta GA and Purdy, Crane, Marionville and Marshfield MO. Smashed pennies sold well today. Two young boys from the neighborhood came in toward the end of the day and spent what I am thinking may have been the majority of their allowances in the penny smasher. We were late closing because some late visitors lingered.
I guess Ron found the time to sneak away with my camera (perhaps while I was entertaining visitors) to take this photo -- a new perspective on Afton Station, which is peeking artfully out from behind weeds growing in a box across the street. 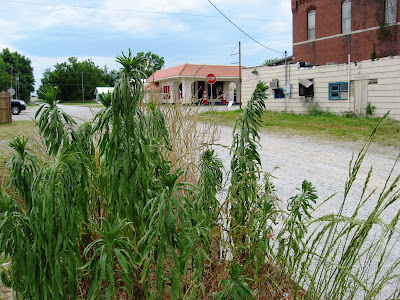 Man, if starlings won't eat those potato bites, they must be REALLY bad. Starlings seem to eat just about anything!

Hope your potato bites do not atract any vultures :o)