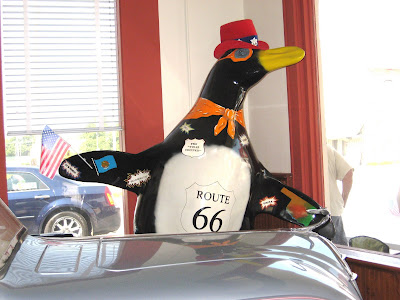 Tripper is gearing up for the Fourth of July with his flag and Uncle Sam hat!

Sometimes, there's just too much going on around me. Today was such a day. Let me explain. First of all, I should say that Ron M. came to Afton with me today, and Tattoo Man was there and had opened up even before we got there. So I wasn't doing this all by myself by any means. I did, however, have a nasty little headache all day, probably brought on by stress, 103-degree temps, and more stress. It was the first headache I've had in years, but after a couple of Tylenol and a neck rub by Ron, it started to improve considerably. But people coming and going all day was not conducive for taking even a moment's rest.

The local chapter of the Disabled American Veterans held its yearly fund-raiser today in the form of a Poker Run, and Afton Station was, as usual, one of the stops. Unlike last weekend, however, we were not responsible for handing out the cards and registering people's hands. Instead, a group representing the DAV set up a table outside of the Station for that. Because of the heat, we invited them to set up inside, but they braved the scorcher under our portico. I lost track of how many of the participants (all on motorcycles) actually came into the Station to look around, but when I stopped counting there were about 35 or 40 of the total 60-some who came to draw cards. Most of them just came in to get relief from the heat. Some of the riders looked like they were one cold bottle of water away from heatstroke. 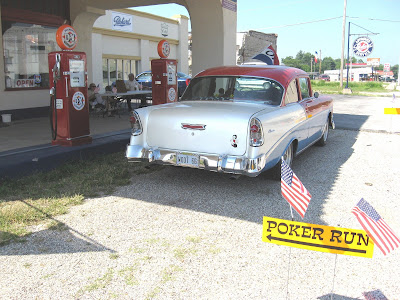 Afton Station was all decked out in a patriotic theme today. Ron Jones' red,white, and blue 56 Chevy and the flags put out by the DAV folks made things quite festive. 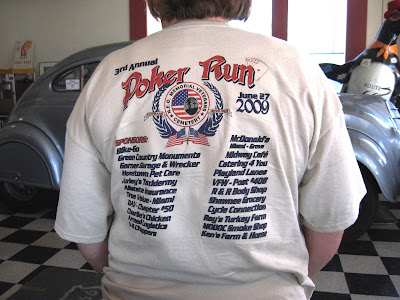 The DAV folks had nifty shirts.

But that was just the tip of the iceberg (no pun intended). We also had 29 of our own visitors, not connected with the Poker Run. I must say it was a pretty exciting roster of guests today. For one thing, we had our first visitors from Africa, a father and daughter from Zimbabwe! We've now had visitors from every continent except Antarctica. (If any Antarcticans are reading this, please come to visit so I can complete the roster!) We also had a father and son from Norway who were doing the whole Route. In addition, there were visitors from Sturgeon Bay and Racine WI, Redmond KS, Vernon CT, Pageland SC, Rochester NY, Joplin, Sedalia and Marshall MO, Mountain Home AR, and LaVerne, Vinita, and Afton, OK.
The folks from South Carolina and Vernon, Connecticut were on their way back from the National Packard Meet in Branson. We are longstanding members of the Packard Club, but didn't participate this year because David is recovering from eye surgery and there were no cars I could drive there by myself. It was fun to hear about the Meet, and the Afton Station visitors even knew some of the Packard people we knew in the past.
It's always fun to meet someone face-to-face whom you've communicated with via computer for some time. Today, I had a surprise visit from Abe and Vanessa Ezekowitz from Joplin, who were out for an afternoon drive. Nice to meet you, Vanessa and Abe! 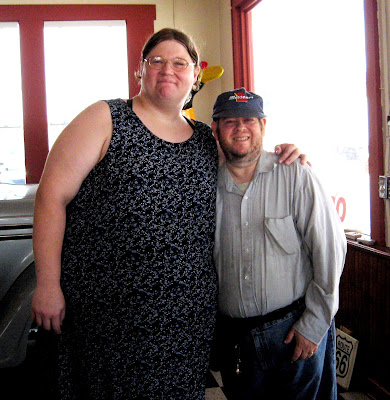 Vanessa and Abe
Another couple arrived and indicated they were from Afton, two very nice people who moved there within the past 3 or 4 years, and who expressed the same concerns about the future of the town of Afton as we have had. We had a lengthy discussion about the problems, and Ron M. and I were buoyed by knowing that we might have co-conspirators in the attempt to bring a little of Afton back to life. I predict we'll be seeing more of these folks.

Please DO get some rest! Sounds like a crazy day, but so glad that the station is getting such attention!