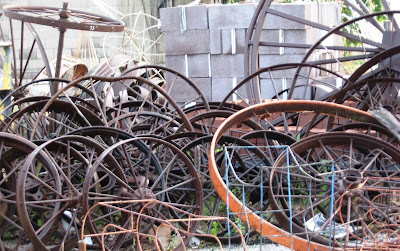 Anybody need a wagon wheel? There are lots available in Chelsea.


I'm very tired. I've decided that it's because of the 4 hours of sleep I got last night, coupled with a long, hot day at Afton Station. Excuse enough? I think so.


After celebrating Pat Bremer's birthday at Local Table last night, and after I took them on an evening tour of the lights of Tulsa, including the new Meadow Gold sign, Jen and Pat came home with me and spent the night. This morning we were up bright and early and went to Jimmy's Egg for a hearty breakfast. After that, I picked up Ron M. and we left for Afton at 7:30. Pat and Jen decided to stop back at Afton Station on their way home to Indianapolis, so we met up with them again there. Here they are, with Ethyl. I trust they got back to Indy with no problems. 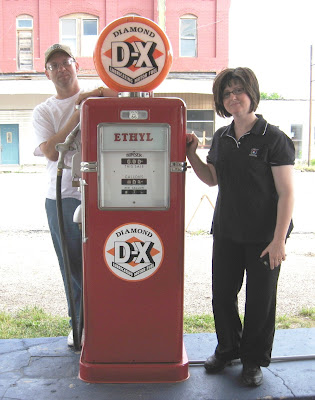 Tattoo Man arrived, a nice surprise, and spent the day with us. The three of us met and greeted an interesting array of 19 travelers, but first we had to wait out a pretty significant downpour. Once the rain let up, five hot, wet motorcyclers from Mokena, IL sought shelter under our portico. They stayed a while, dried out, and did a little spending before moving westward on Route 66. 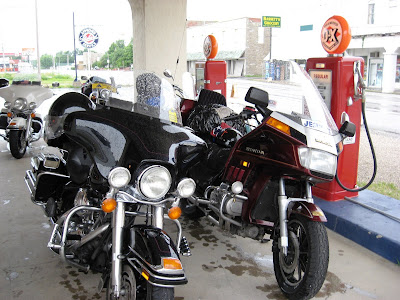 Motorcycles drip-dry while their owners take advantage of the time by perusing the old cars, using the restroom, and making quite a number of purchases. A nice, jolly group!


After that, the skies cleared, the sun came out, and so did the travelers, which included folks from Muskegon MI, Tonkawa OK, San Antonio TX, Topeka KS, Moline IL, Milwaukee WI, and a solo traveler from London, England. Nearly all of them were taking significantly lengthy Route 66 trips. I'm convinced that the "tourist season" on the Mother Road has officially begun. 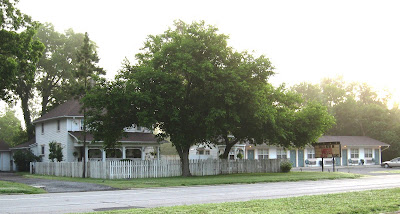 This is a bad picture of the Chelsea Motor Inn in Chelsea. It's a great little 6-room mom 'n pop motel owned by friends of mine who are extremely interested in Route 66 and in maintaining a top-notch, clean, inexpensive motel. Just a hint... if needing a place to stay in Eastern Oklahoma, keep them in mind!

I will definitely keep the Chelsea in mind!

Hope you are able to get some good sleep tonight. Sounds like it was a busy, fun, and productive day at Afton!

Last year when I rode my motorcycle by your place, I was caught in rain on my way home. So I can sympathize with those riders.

I've been seeing more tourists around here, so I guess the season has started again, too.