When I was a kid, basically all I knew about hay was that Little Boy Blue was "under the haystack fast asleep". That nursery rhyme made a haystack seem like a romantic concept in my childhood mind. Living in the city, I didn't see too many haystacks, yet when I moved to Kentucky as a teen, I was outraged that baling machines had turned haystacks into big, rectangular bricks that sat heavily on the landscape. And then, not too many years ago, I was further offended by the emergence of those cylindrical bales wrapped in plastic that became a ubiquitous sight in just about every farmer's field. Well, I'm nothing if not willing to change, and I admit I've changed my mind on this issue. Except for that plastic (which I must research to find out if it's biodegradable), I've come to appreciate them and find them stunning when dotting an expansive field, like this one on Route 66 just outside of White Oak. I took these pictures on the fly, on my way home from Afton. 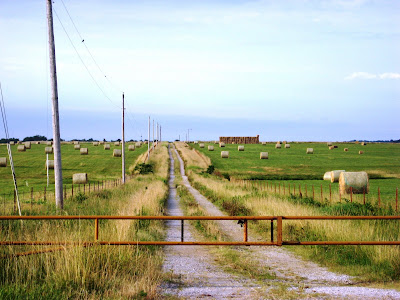 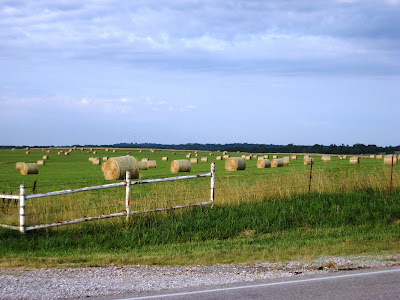 I left Tulsa for Afton before 6 a.m. today, thus it was still dark while I was in the city. That made for some nice picture-taking. Look what turned up this weekend on the front of a liquor store in east Tulsa, on 11th St. (Route 66). Although obviously airbrushed in haste, it's quite professionally done. It's a nice tribute, and it seemed to glow in the dark when my flash went off. It covers part of a building that is also airbrushed with other designs and is quite a head-turner. 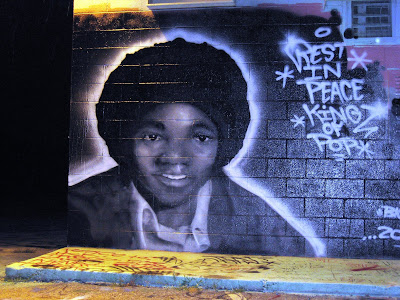 Since I wasn't chased by the cops this time, I was able to stop for a better shot of the neon at the Oasis Motel, just a few yards from the Michael Jackson mural. 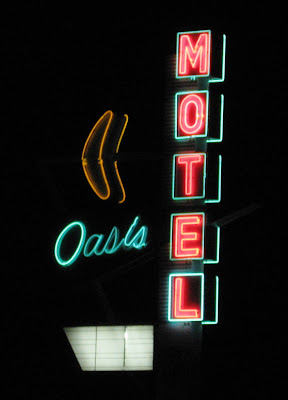 And the sunrise was even more spectacular than usual this morning! 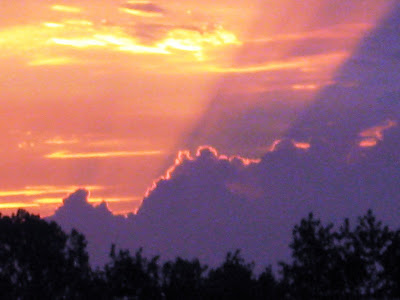 Once at Afton Station, the morning was gloriously quiet. I had the chance to do a little cleaning, make a few more small buttons to sell, and take "inventory" of how many visitors we've had thus far this year. So far......1507 traveling souls have walked through our doors. I'm guessing we'll easily hit 3500 again this year. Our traditionally biggest months are yet to come.

Betty came for a visit, and then 20 more. They were from Jamestown TN, Wooster OH, Bentonville AR, Dallas TX, Ozark MO, Chicago IL, Elkhart IN, and Pryor and Oklahoma City, OK. Jerry McClanahan's wonderful "EZ66 Guide" was flying out the door today! I'm so glad that people are using it on their travels, because it's amazingly comprehensive and up-to-date, clearly the best Route 66 tour guide on the market. It was cooler today (high of 94), so those who arrived via motorcycle (returning from the OKC meet) seemed less likely to pass out on our doorstep. That's a very good thing.

My dear friend Judy Griffin from Orlando, FL is coming tomorrow to stay with me for a few days, so I may be AWOL for a while. I'll be back when I'm able.

Most of the hay bales we see around here now are the cylindrical kind. I kind of like them. The roundness against the flat land is sort of pleasing to my eye.

Great shot of the Oasis sign--I see they included a boomerang!

Elkhart is the next town over from us--I used to live there, and have relatives there!

I was raised on a farm north of Nowata, OK. As a boy, I hauled a LOT of those small square bails. They weigh between 60-100 pounds each, depending on the type of grass from which they're made. And, they are hauled when it's 110 degrees in the shade and there's no shade. Sometimes you'll move a bail and there's a snake under it, trying to escape the sun. I've walked through bumble bee hives. I remember once we dumped half a trailer load of hay in Coffeyville, KS, right in the middle of the intersection of Highway 169/166. We reloaded it, drove a few miles down 169, almost to South Coffeyville, OK, and dumped the same half again!

I feel whoever invented the large round bail deserves a holiday in his/her honor! You just need a tractor with a spear and a trailer, and you can haul a winters supply of hay in a couple of afternoons and hardly break a sweat.